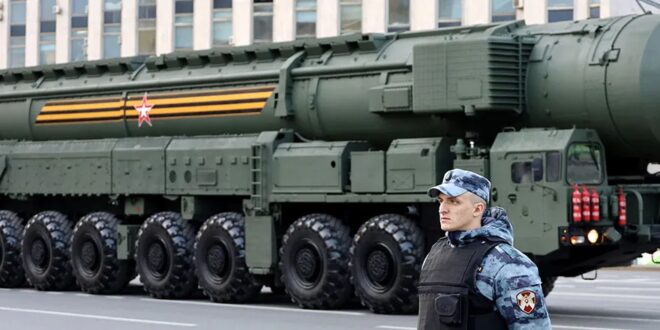 As Russia’s offensive in Ukraine stalls, there is a real risk that it could escalate its nuclear threats if faced with the potential loss of Crimea.

The Cold War saw many armed interventions by the two superpowers – by the Soviet Union in Eastern Europe, Africa and Afghanistan, and by the US in Korea and Indochina. The frequency of such interventions increased after 1990, with wars fought by the US in Serbia, Afghanistan, Iraq, Libya and Syria, and by Russia in Georgia, Ukraine and (other parts of) Syria. In several cases, one of these powers sought to undermine the other through arming its military opponents, often on a considerable scale. But none of these wars saw direct conflict between their armed forces. This is one of the main reasons why no nuclear weapon has been used since August 1945.

The strength of this mutual restraint lies in both its simplicity and its long history. During the current crisis, some have argued that the US should now call Russia’s bluff and use armed force for defined humanitarian purposes, for example to create a No-Fly Zone or break the blockade of Odesa. Such a limited use of Western military power, they suggest, would not necessarily lead to a wider war.

Yet, once the threshold of direct military conflict had been crossed, even in a deliberately limited way, it would be hard to reach a mutual understanding of where a new threshold should be set. A commitment to provide military escorts for Black Sea commercial shipping, for example, would require threats to attack Russian submarines and surface vessels. Perhaps, faced with such a threat, Russia’s leaders would back down, accept the constraints which these measures would impose, and thereby avoid a direct confrontation with superior NATO forces. If they were to do so, however, they would likely face further limited Western military interventions, progressively restricting their room for manoeuvre in their struggle with Ukraine. In order to restore conventional deterrence, therefore, it is also possible that Russia would conduct a military response of its own – for example, through targeting the ships and radar facilities being used to enforce a blockade.

The difficulties involved in limiting escalation in a conventional war between Russia and NATO are likely to be greater because, in contrast to past conflicts in the Middle East or East Asia, this would be happening very close to Russia’s heartland. Russia entered the war much weaker militarily than NATO, and its strength has been further eroded as a result of combat losses. If NATO were now to enter the war, many of its key assets, including command centres and military bases, could come under threat within days. Russia’s strategic nightmare – a US preventive attack on its nuclear retaliatory potential – would begin to look uncomfortably close to reality.

NATO’s ‘flexible response’ doctrine during the Cold War planned for first use of nuclear weapons in response to an invasion by superior Russia conventional forces, with the aim of stopping the war before too much territory was overrun. NATO leaders thought that this was a credible deterrent threat, despite the potential for global nuclear war, because they would be acting to protect their states’ own survival while the Soviet Union could – and did – avoid this disaster by not launching an attack.

Russia uses a similar logic to deter a conventional attack today. As with NATO policy during the Cold War, nuclear escalation would not be certain. Given the catastrophic consequences that would follow, however, even a significant possibility would have to be taken seriously.

In order to increase the credibility of its nuclear threats, Russia would be likely to consider a variety of attack options against military and civilian targets, against non-nuclear and nuclear states, and with varying levels of destructive power.

Some will say that any threat to use nuclear weapons – even on a limited scale – must, by its nature, show that Vladimir Putin had lost touch with rationality. Yet, if the US were to believe that a nuclear threat were credible, and Putin had made clear that nuclear use could be prevented if the US were to refrain from particular actions, it would be crazy for US leaders not to take such threats seriously. And the balance of stakes in such a conflict – with the US’s own territory largely immune from the effects of war, while the Russian state faced a catastrophic defeat – would likely favour Russia in a game of nuclear chicken.

Given the frequency with which Russia’s leaders have issued nuclear threats, it might have to resort to ‘risky signalling’ in order to demonstrate that, this time, it was serious. This could include the surging of missile submarines and road-mobile missiles, the removal of non-strategic warheads from central storage sites, and moving military commanders to protected underground bunkers.

Such an escalation would incur significant risk for Russia, not least from reciprocal alerting by the US, the UK and France. It could also backfire politically, both within Russia itself and in terms of the key international partners – especially China and India – on whom it now relies. It is hard to imagine that Russia will issue such a threat in current circumstances, when NATO forces are not fighting Russian forces, and when the destruction and disarmament of Russia itself is not on the agenda.

But this could rapidly change in the event of escalation to a war which threatened the defeat of Russia’s military by NATO, with all that this could mean for the survival of its authoritarian political system. If it did come to this, operational pressure for preventive attacks on one side, and growing public panic on the other, would place a premium on leaders taking the right decisions at the right time in conditions of imperfect information and high emotions. It would feel like the Cuban Missile Crisis on steroids.

Over the last three months, NATO allies have progressively increased the size and sophistication of the weapons they have been prepared to supply to Ukraine. Despite this, Russia has refrained from attacking supply convoys on NATO territory. The absence of chemical weapons use by Russia might also be partly explained by fear of NATO retaliation.

Moreover, Russia still has other escalatory options available to it. The intensity of attacks on Ukrainian infrastructure remains high. And its leaders might still reasonably believe that, in the coming months, they could draw a defensive cordon around most of their recent territorial gains – notably in Luhansk and Donetsk, including Mariupol – and use partial mobilisation of Russia’s large reserves of military manpower to prevent a successful Ukrainian counteroffensive. The tide of war could, therefore, still lead to a prolonged stalemate on the ground.

Given both the volume and quality of assistance to the Ukrainian forces, and the rapid depletion of key Russian capabilities, however, it is now increasingly plausible that the next period will see Ukraine reversing most of Russia’s recent territorial gains, including Kherson and even Mariupol.

It is hard to imagine that a nuclear threat could credibly deter an advance into these territories, and there is no sign that Russia is contemplating such a threat.

A successful Ukrainian counteroffensive would also lead to more opportunities for limited cross-border attacks (including in the Belgorod area) to destroy bridges, railheads, storage sites and air bases, obliging Russia to devote more of its resources to rear-area defence. Because Ukraine does not want to permanently occupy any of these areas, it is also hard to see such action being perceived as posing an existential threat to the Russian state.

If there is an escalatory risk, it will be in relation to Ukrainian attempts to liberate the territories it lost in 2014. In Donbas, Russia had (until February) recognised the two breakaway republics as nominally belonging to Ukraine. Even now, after recognising the republics as independent, Russia has not annexed them, and the militia of the two republics are not incorporated into its armed forces. The loss of these territories would be a humiliation for Putin. Since these territories have never been seen as part of Russia, however, their loss would be less likely to be seen as an existential threat.

Crimea is in a different position. Until 1954, when it was transferred to the Ukrainian Soviet Socialist Republic, it had been part of the Russian Empire since 1783. Over the last eight years, its society has been re-engineered to become part of Russia. And it is the home of Russia’s Black Sea fleet. The prospect of its loss through military action would be much more likely to be seen as a fundamental challenge to Russia’s own territorial integrity.

Ukrainian leaders have stated that their objective is to regain all of the territories lost since 2014, including Crimea. In the absence of a ceasefire or deliberate restraint, therefore, the military logic of a Ukrainian offensive could take on a life of its own. If Ukrainian forces were to recapture Kherson and other areas close to the Crimea border, they would have an incentive to deny the use of Crimea’s Sevastopol naval base as a secure sanctuary from which Russian forces could continue their blockade of Ukraine’s export trade. The Kerch Bridge could also be a tempting target.

Were such attacks to escalate, especially if seen as a precursor to a full-scale invasion of Crimea, it could lead to an increased danger that Russia might resort to a threat of nuclear escalation. Such a scenario could be one of the most worrisome over the coming months.

Actual use of nuclear weapons – even on a very limited scale – would incur enormous risks for Russia. As well as the worldwide reputational damage which it would incur, there would be a real risk of conventional retaliation by NATO that could further weaken Russia’s military position.

A specific threat to use nuclear weapons in relation to Crimea, on the other hand, might be viewed by Putin as a way to restore some of his coercive power, even if he (and the US) doubted whether he would deliver on such a threat. There is a parallel here with the Berlin crisis in 1961, where the fear of nuclear escalation helped curb maximalist aims on both sides.

If a red line were not accepted by Ukraine, Russia might then feel that it had to consider a series of further escalatory options, such as putting its nuclear forces on higher alert. Faced with the alternative of the likely loss of Crimea, Putin might believe that Ukraine (with US encouragement) would be likely to blink first. It would be a moment of extreme peril, with all the parties seeking to understand the intent of each other even as they looked to pursue their national interests.

Precisely because of the peril inherent in such a situation, a nuclear crisis of this sort could make it easier for leaders to make difficult compromises. Provided that the war was ended and the blockade of Odesa lifted, Ukraine’s leaders might be willing to postpone a settlement of the Crimea question. For Putin, the failure of the invasion, and the subsequent success of the Ukrainian counteroffensive, would have been a massive humiliation. But he would at least be able to argue that the might of the Russian strategic arsenal had, at a moment of great national weakness, successfully deterred NATO’s designs for dismembering Russia. This could be enough for both sides to avoid the worst outcome of all.

Post Views: 39
Previous A UK Joint Methodology for Assuring Theatre Access
Next No War for Old Spies: Putin, the Kremlin and Intelligence