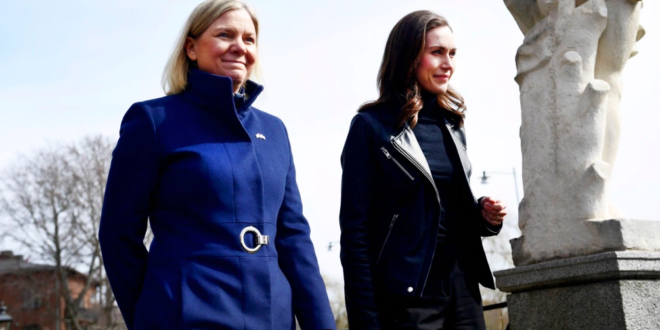 Finland and Sweden have handed in their official applications for membership in the North Atlantic Treaty Organization (NATO), ending their longtime neutrality status amid growing concerns over Russia’s military aggression against Ukraine.

“I warmly welcome the requests by Finland and Sweden to join NATO. You are our closest partners,” NATO Secretary-General Jens Stoltenberg told reporters on May 18 after receiving the application letters from the two Nordic countries’ ambassadors at alliance headquarters in Belgium.

“The applications you have made today are an historic step. Allies will now consider the next steps on your path to NATO,” Stoltenberg said.

Both Sweden and Finland are members of the European Union, and the latter shares a 1,340-kilometer border with Russia.

Helsinki chose to remain neutral in the postwar era following two wars with the Soviet Union that saw Finland lose 1-10th of its territory, while Sweden has been traditionally nonaligned for the past two centuries.

The application has set in motion a process that is expected about two weeks, although Turkish President Recep Tayyip Erdogan has expressed reservations about Finland and Sweden joining.

Erdogan said on May 16 he could not agree to the accession of two countries that support “terrorist organizations,” a reference to the banned Kurdistan Workers Party (PKK) and the Kurdish militia People’s Defense Units (YPG) in Syria.

If Turkish objections are resolved, the two Nordic countries could become members within a few months, fast-forwarding a process that usually takes eight to 12 months.

German Chancellor Olaf Scholz said he also was confident Turkey would support the move by both countries, and U.S. State Department spokesman Ned Price likewise expressed confidence that Ankara would not block their entrance into the alliance.

The White House said earlier that U.S. President Joe Biden will host Niinisto and Andersson for a meeting on May 19 to discuss the applications as well as the broader topic of European security.

The two countries have moved quickly toward joining NATO since Russia launched its unprovoked invasion of Ukraine on February 24.

The steps taken by the two Nordic neighbors have prompted warnings from Russia, which would see NATO expand right up to its western border.

Russian President Vladimir Putin said on May 16 that while Russia did not see Finland and Sweden’s decision to join NATO as a threat, any deployment of military infrastructure there may trigger a response from Moscow.

Post Views: 71
Previous Sweden, Finland To Submit Bids To Join NATO Together
Next To approve Sweden and Finland’s NATO membership, Turkey wants its F-35s back