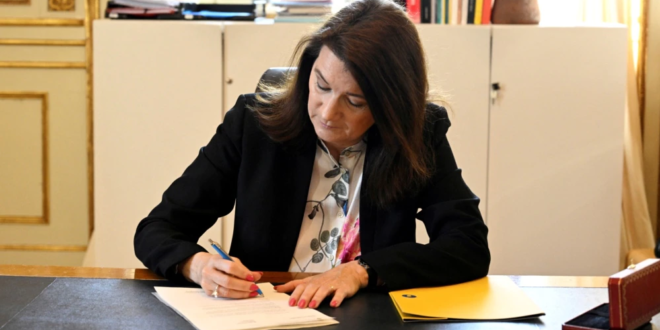 Finland and Sweden announced they will submit their bids to join NATO together, as the two countries expect to be able to smooth out a threat from Turkey to block the military alliance’s expansion.

“I’m happy we have taken the same path and we can do it together,” Swedish Prime Minister Magdalena Andersson said on May 17 during a joint press conference with Finnish President Sauli Niinisto.

Finland’s parliament on May 17 overwhelmingly endorsed a bid to join NATO, abandoning more than seven decades of neutrality.

Lawmakers voted 188-8 in favor of the proposal put forward by Niinisto and Prime Minister Sanna Marin, which came hours after neighboring Sweden signed a formal request to become a member of the Western alliance.

However, opposition from Turkey, which accuses Sweden and Finland of failing to take a clear stance against terrorism, has complicated their accession, which must be unanimously approved by the alliance’s 30 members.

But Niinisto told Sweden’s parliament in an address to lawmakers on May 17 that he was confident that “with the help of constructive talks, the situation will be resolved.”

German Chancellor Olaf Scholz said he also was confident Turkey would support the move by both countries, and U.S. State Department spokesman Ned Price likewise expressed confidence that Ankara would not block their entrance into the alliance.

The White House said earlier that U.S. President Joe Biden will host Niinisto and Andersson for a meeting on May 19 to discuss the applications as well as the broader topic of European security.

The two countries have moved quickly toward joining NATO since Russia launched its unprovoked invasion of Ukraine on February 24.

The steps taken by the two Nordic neighbors have prompted warnings from Russia, which would see NATO expand right up to its western border.

Russian President Vladimir Putin said on May 16 that while Russia did not see Finland and Sweden’s decision to join NATO as a threat, any deployment of military infrastructure there may trigger a response from Moscow.

Foreign Minister Sergei Lavrov on May 17 echoed Putin’s comments, saying that Finland and Sweden joining NATO probably wouldn’t make “much of a difference,” as the two countries had long participated in the alliance’s military drills.

But he warned that Russia would closely monitor NATO’s activities in the future member states.

“NATO takes their territory into account when planning military advances to the east. So in this sense there is probably not much difference. Let’s see how their territory is used in practice in the North Atlantic alliance.”