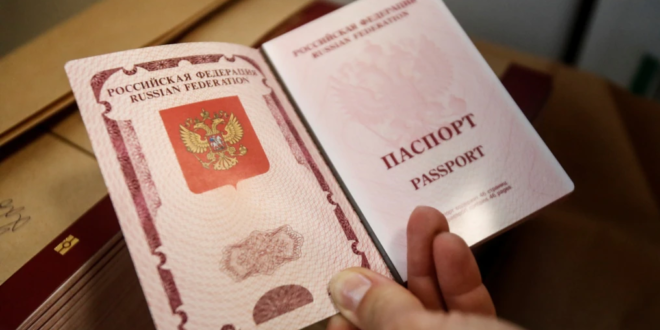 A decree allowing residents of two Ukrainian regions, Kherson and Zaporizhzhya, to obtain Russian citizenship has prompted objections from Kyiv and the U.S. State Department.

The Ukrainian Foreign Ministry in a statement protested the “illegal issuing of passports,” calling it “a flagrant violation of Ukraine’s sovereignty and territorial integrity, as well as norms and principles of international humanitarian law.”

In Washington, State Department spokesman Ned Price voiced concern that the plan was part of “Russia’s attempt to subjugate the people of Ukraine — to impose their will by force.”

“That is something that we would forcefully reject,” Price told reporters.

Russian President Vladimir Putin on May 25 signed the decree affecting residents of the two Ukrainian regions, parts of which have been occupied by Russian forces during Moscow’s unprovoked invasion of Ukraine.

The decree states that residents of the two regions can receive Russian passports through a simplified procedure that was introduced in 2019 for residents of parts of Ukraine’s Donetsk and Luhansk regions that were controlled by Moscow-backed separatists.

After Russia launched its invasion of Ukraine on February 24, its forces managed to take a huge part of the Kherson region, including the region’s capital, Kherson, and about half of the Zaporizhzhya region, with the regional capital, Zaporizhzhya, remaining under Ukrainian control.

Putin and other Russian officials have insisted that the invasion’s goal was not to occupy Ukraine.

Moscow and pro-Moscow officials now say the regions could become part of Russia.

“The simplified system will allow all of us to clearly see that Russia is here not just for a long time but forever,” the Moscow-appointed deputy leader of the Kherson region, Kirill Stremousov, told Russia’s RIA Novosti news agency.

“We are very grateful to Russian President Vladimir Putin for all he is doing for us, for protecting Russian people in historically Russian lands that have now been liberated,” Stremousov said.

Applicants are not required to have lived in Russia and do not need to provide evidence of sufficient funds or pass a Russian-language test. It will take about three months to process applications, Stremousov said, adding that the Kherson region has also begun work on setting up centers to issue Russian passports.

Authorities in Crimea, the Black Sea peninsula illegally annexed from Ukraine by Moscow in 2014, have said that they are ready to set up passport-issuance centers for Ukrainian citizens who choose to obtain Russian passports.

Meanwhile, Moscow says it is preparing measures to use against “unfriendly actions” by English-language media toward Russian media.

Russian Foreign Ministry spokeswoman Maria Zakharova told reporters in Moscow on May 25 that Russia “will always respond to all unfriendly actions against Russian media.”

“We are currently working out a whole package of measures against media, journalists from Anglo-Saxon media outlets, taking into account repressive measures undertaken against Russia media outlets,” Zakharova said, adding that Russia’s responses might be asymmetrical.

She gave no further details.

After Russia launched its unprovoked invasion of Ukraine on February 24, the European Union suspended the broadcasting activities of some Russian state-backed media, including the leading Russian external broadcaster, RT, questioning the impartiality of their coverage of the war.

Post Views: 141
Previous Moscow-Held Kherson Region to ‘Ask’ for Russian Military Base
Next Kissinger: These are the main geopolitical challenges facing the world right now