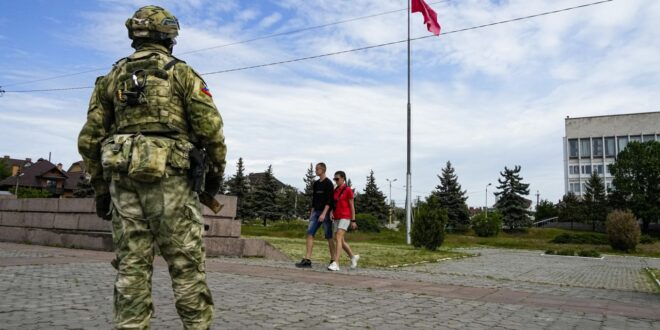 Moscow-Held Kherson Region to ‘Ask’ for Russian Military Base

The Moscow-appointed leaders of southern Ukraine’s Kherson region will “ask” for a Russian military base, state media reported Tuesday in the latest example of Russia’s creeping grip on captured Ukrainian territories.

Russian forces have installed pro-Moscow “military-civilian administrations” and introduced Russian currency, media and internet services in an effort to cement their presence in occupied areas of Ukraine.

Kirill Stremousov, the deputy chief of the Kherson region’s pro-Moscow administration, told the state-run RIA Novosti news agency that a Russian military base “will guarantee the security of the region and its inhabitants.”

“There should be a Russian military base in the Kherson region. We’ll be asking for it, and the entire population is interested in it,” Stremousov was quoted as saying.

Echoing the de-facto governor’s comments last week, Stremousov said the Kherson region will become “a subject within the Russian Federation” but ruled out a referendum anytime soon.

“Considering that the results of a referendum will not be recognized by Western countries anyway, it’s a waste of time to hold it today,” RIA Novosti quoted him as saying.

The Kremlin, without confirming an imminent annexation of the occupied regions of southern Ukraine, has indicated that “the will of the people” would decide whether Kherson joins Russia.