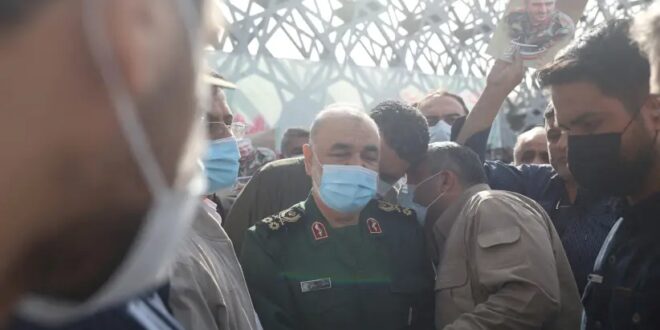 Iranian leader warns “Zionist regime” that Tehran will strike back

Vahid Jalalzadeh, the chairman of Iran’s Majlis National Security and Foreign Policy Commission, gave an interview to Al-Alam TV saying that the Islamic Republic would continue to support the Syrian regime but that reports it was replacing Russians in Syria were mistaken.

He also said that Iran and Saudi Arabia should continue working on talks toward some kind of amicable relationship, dismissing reports that Parchin had recently been attacked by drones.

Jalalzadeh’s comments likely reflect high-level foreign policy thinking in Iran. He was asked about the Russian role in Ukraine and claims that Russia is withdrawing forces from Syria. He was asked if Iranians and “axes of resistance were deployed in their place.”

His reply is important

“Russia and the Islamic Republic of Iran were present in this country at the invitation of the legitimate government of Syria,” he replied, “so we will not take the place of a country and no country will take our place.”

That means that he is apparently downplaying these reports. “We and Syria have had a very wide and deep relationship. Russia came to the aid of the Resistance Front [Iran and Hezbollah] and the Syrian government; we welcome whenever Syria invites us to be more present.”

He mentioned a recent visit by Syrian President Bashar Assad, noting that, “for example, we have a problem in the issue of land transit to Syria, which is to be resolved. Agreements were reached, they provided reports, and the trip was very positive in all respects.” The problem was not explained but it may be via Iraq. It’s unclear how this may be “resolved.” Iran traffics weapons via Iraq to Syria and Lebanon.

Who carried out the recent assassination in Iran?

Asked about a recent assassination in his country, he warned “the Zionist regime” that Iran would strike back. “This assassination was planned by the Zionists and it is not new, and we will hit them several times. These testimonies show that the path of the Islamic Republic of Iran to end the life of that regime is right.”

This is a direct threat to Israel, which has warned in recent weeks about travel to Turkey because of Iran’s threats.

He was also asked about allegations of some kind of incident at Parchin, a military facility. Jalalzadeh responded that “it is natural for hostile countries to take political advantage of every natural event in our sensitive centers. The latest report we received in the Parchin debate has not yet cited expert evidence of military operations.” That means he has downplayed the reports that drones were used to attack the Iranian military complex about 30 km. (19 m.) southeast of Tehran.

He also indicated renewed interest in Tehran regarding aa potential Iran deal. He turned his attention to US policies in the region, claiming that Washington and the West were trying to influence the Gulf states against Iran.

On Saudi Arabia, he appeared to want new relations between Iran and the kingdom to grow. “We are very happy that Saudi Arabia and Iran are currently in talks to resolve some of our problems. I think it is too early; let the two foreign ministers meet. We are still at the beginning of the road,” the commission chairman said.

He discussed Yemen, indicating that “the Saudis accepted that Yemen could not be a major issue between us and Saudi Arabia.”

These last comments are important because recent reports indicated that US President Joe Biden might go to Saudi Arabia in the coming months. This could be part of a wider US push for Riyadh to consider closer ties with Israel. Reports have indicated that new security arrangements for the Red Sea and Straits of Tiran are part of this. Iran wants the US presence and multi-national force reduced in these areas, and is worried that Saudi Arabia may be growing closer to America, after several difficult years in relations.