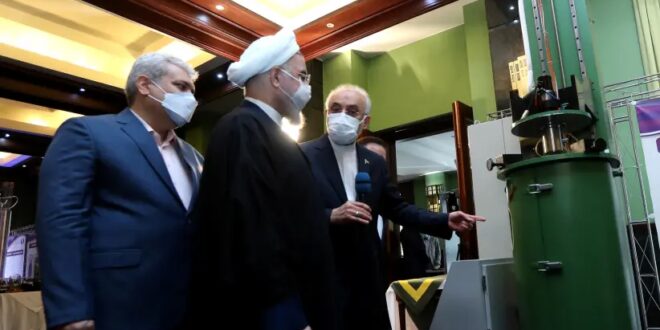 Dr. Ayub Entezari, who died over the weekend, reportedly showed former Iranian president Hassan Rouhani around a turbine factory in 2019.

Entezari was an aerospace engineer who specialized in missiles and drones at Iran’s Ghadir Industrial Turbines Company (GITCO). According to photos, he showed Rouhani around the company’s turbine factory in the Yazd province in Iran.

No one has yet claimed responsibility for his death, which was initially reported by Iranian media outlets.

GITCO “specializes in the manufacturing of auxiliary and accessory systems, parts and components for turbines and compressors used in power generation plants and oil & gas industries,” according to the company’s website. It is currently owned by the Oil Turbo Compressor (OTC) Group and has over 300 employees.

Entezari, a graduate of Iran’s Sharif University of Technology, died two hours after arriving at a hospital to receive medical care. His condition grew worse after returning from dinner with a relative. According to Iranian reports, his host hasn’t been seen since that night.

Iranian authorities related to his death in different ways.

The scientist was initially labeled a “martyr” on the official death certificate. The governor-general’s office later corrected the label and called the original message a mistake, according to Kian Sharifi, a BBC journalist.

Judicial authorities in Yazd called Entezari an “ordinary employee of an industrial industry,” ostensibly underscoring the importance of his death.

The judicial authorities also rejected the reports of food poisoning and said Entezari “died from a disease.”

What is a gas turbine?

A gas turbine, also known as a combustible turbine, heats air and fuel at high temperatures, creating a hot gas, which causes turbine blades to begin to spin. The spinning turbine is connected to a rod in a generator.

That generator slowly moves a magnet which is surrounded by copper wire, converting that energy into electricity, General Electric explained on its site.

IRGC intelligence officers reportedly suspected information leaked from inside the organization led to Khodayari’s assassination and were looking for potential informants inside the Quds Force’s Unit 840.

His family was told by the IRGC that he killed himself due to “psychological problems caused by separation from his wife,” with an alleged letter left by the colonel backing up that claim.

Khodayari, deputy commander of Unit 840, was responsible for terrorist operations against Israeli and Western targets outside of Iran. A New York Times report claimed that Israel claimed responsibility for the assassination and informed the US as much.