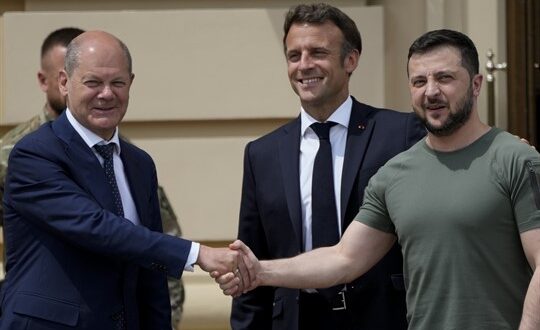 Macron Makes Amends in Kyiv, Erdogan Cracks Down in Ankara and More

For all its human tragedy and geopolitical drama, the war in Ukraine’s impact on the European Union’s retail politics includes comic elements worthy of a reality TV show. From week to week, the bloc’s leaders have vied to outdo one another in their declarations and demonstrations of support for Ukraine’s war effort, with the parade of European leaders visiting Kyiv to meet—and, as importantly, be photographed—with President Volodymyr Zelenskyy at times resembling a geopolitical version of “The Bachelor.”

While the support is needed and salutary, the performative aspects of it have created a dynamic in which, above all, European leaders have sought to avoid saying or doing anything that may lead them to become “Twitter’s main character” for the day—the object of scorn and derision among analysts and observers scrutinizing how many weapons each EU state has delivered to Kyiv and how maximalist each leaders’ declarations on the war and its aims have been.

Post Views: 65
Previous Berlin Is Having Second Thoughts About Its Trade Dependence on China
Next Macron’s Mixed Messages on Ukraine Come With a Cost