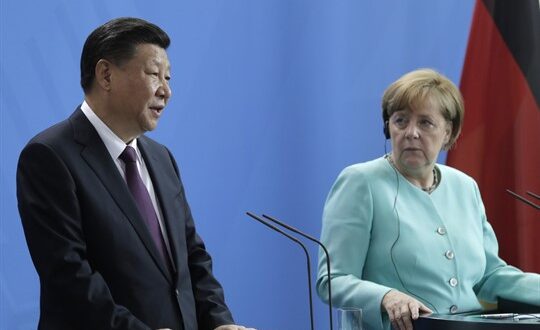 Berlin Is Having Second Thoughts About Its Trade Dependence on China

In the immediate aftermath of Russia’s invasion of Ukraine, a once-hesitant Germany was shocked into reorienting its national security posture. In response to Moscow’s aggression, Chancellor Olaf Scholz proceeded to announce the creation of a 100-billion-euro supplemental fund for the German military, halt the approval of the Nord Stream 2 natural gas pipeline and support international sanctions and energy embargoes against Russia.

This same sensibility, in which crisis and opportunity converge, has also reinvigorated the long-standing debate in Germany over the country’s dependence on trade with China. Various factions within the Ampelkoalition, or the “traffic light coalition” government made up of the Social Democrats, the Greens and the Free Democrats, are urgently scrutinizing bilateral trade relations, with an eye to recalibrating existing ties with China to better integrate security concerns that have gathered steam in recent years. The challenge for the coalition government will be to accomplish this objective without damaging Germany’s long-term economic interests.

Germany’s dependence on trade with China began to emerge after the 2008 financial crisis, when former Chancellor Angela Merkel embraced China’s thriving market as an outlet for Germany’s exports, at a time when most of the world’s economies were in free-fall. Taking note of China’s human rights record, of which Merkel was a critic, this economic-driven approach was known as wandel durch handel, or “change through trade,” emphasizing engagement and commercial interconnectedness as a way to advance liberalism within China. Merkel would also go on to use Germany’s trade relationship with China as a hedge against what was perceived to be an increasingly unreliable United States, particularly during the Trump administration, which slapped tariffs on European steel and aluminum exports and repeatedly threatened to do the same for German automobiles.

Over the next decade, Merkel opposed the European Union’s anti-subsidy and anti-dumping duties on Chinese-made solar panels; led the effort to finalize the EU-China Comprehensive Agreement on Investments, although its ratification was subsequently suspended; and favored “carrots over sticks” when dealing with China’s authoritarian behavior. Not coincidentally, in 2021, according to the Federal Statistical Office of Germany, China was Germany’s largest trading partner for the fifth consecutive year, with over 245 billion euros worth of bilateral trade volume. Germany’s main exports to China include manufactured goods such as motor vehicles and their parts, packaged pharmaceuticals and high-tech electronic equipment.

Merkel’s approach, however, was consistently met by a chorus of skeptics, with critics arguing that her China policy prioritized short-term economic gains over a long-term strategic vision. Some have even maintained that Germany’s growing trade dependency on China has allowed the authoritarian regime in Beijing to exercise undue influence over Berlin. Like Russia, China is an illiberal and revisionist state that aspires to reshape the rules-based international order in its favor. As a result, China’s growing leverage over Germany, and by extension the EU, represents a strategic challenge and even, according to some observers, a threat.

China’s rise over the past two decades to superpower status, with the world’s second-biggest economy, has reshuffled the international order. And since 2013, under the leadership of President Xi Jinping, a more dominant and assertive China has begun to pose major challenges to the security and prosperity of its neighbors and the West at large. China employs intimidation and pressure tactics in its periphery, including conducting confrontational military exercises in the Taiwan Strait, militarizing its reclaimed islands in the disputed South China Sea and engaging in low-intensity skirmishes on the Chinese-Indian border. It is accused of stealing intellectual property and trade secrets, manipulating its currency and engaging in protectionist trade practices that shield its domestic markets in contravention of the World Trade Organization’s rules. And as mentioned, China is a flagrant human rights violator: The CCP sustains a domestic surveillance state that detains and tortures dissenters, suppresses democratic activism in Hong Kong and commits crimes against humanity against the Uyghur Muslim minority in the Xinjiang region.

Taken together, it appears increasingly clear that China will become, not the responsible global leader many hoped for, but rather a powerful authoritarian state that is slowly but surely expanding its influence around the world.

In this context, China’s expanding economic footprint on the European continent has increasingly become a cause for concern. Bilateral trade between the EU and China is approximately 2 billion euros a day, with imports and exports up 84 percent and 77 percent respectively since 2011. Although China is still viewed positively within the European business community, Chinese direct investments have generated alarm among political leaders.

Beijing’s global infrastructure framework, the Belt and Road Initiative, has come under increased scrutiny, with critics claiming the projects are used to restructure trade routes on Chinese terms. Flagship projects in Greece, Portugal, Hungary and across Eastern Europe and the Balkans have a mixed record of budget overruns, mismanagement and a lack of sufficient returns. China is also engaging in the age-old tactic of divide and conquer, both within Europe and among trans-Atlantic allies. Initiatives such as the 16+1 forum—a China-led project to promote business and investment relations with 16 Central and Eastern European countries—was often accused of being an effort to break European-wide unity on issues such as Chinese human rights abuses. More recently, China sought to retaliate against Lithuania, with which it has few direct trade ties, over Vilnius’ support for Taiwan by suspending imports of any European products with supply chains that pass through the Baltic state.

The risks posed by China’s efforts to use investment for strategic advantage, particularly in the increasingly geopolitical high-tech sector, extend to Germany. Chinese firms’ recent acquisitions of Kuka, a robotics company, and the near purchase of Aixtron, a chipmaker, was a reality check for German policymakers. These predatory practices degrade Germany’s economic self-defense in the event of a conflict. Similar concerns arose when the Chinese company Huawei sought to provide critical 5G components to Germany’s telecom infrastructure. Toward the end of Merkel’s tenure, Berlin implemented new reforms to update security regulations on foreign investment and 5G to fend off undesirable Chinese encroachment. The Ampelkoalition is now looking to build upon this foundation as it holistically reassesses the balance between bilateral trade and national security.

Last month, for instance, Robert Habeck, the German vice chancellor and economy minister, openly supported greater economic independence from China, declaring on May 25 in a statement, “We are diversifying more and reducing our dependencies on China. Respect for human rights has greater weight.” His statement came on the heels of the leak of the so-called Xinjiang Police Files in May, a collection of documents and thousands of photos detailing human rights abuses of Uyghurs. Germany’s newfound desire to distance itself from China has been welcomed by the administration of U.S. President Joe Biden. Upon entering office in January 2021, his national security adviser, Jake Sullivan, assumed that building a common position on China with European allies would be challenging “because we don’t have entirely aligned perspectives.” That could now be changing.

Moving forward, Germany’s coalition government would do well to work across the EU to build a new consensus that supports Washington’s efforts to counter China’s trade and political influence. Additional measures should include reexamining foreign investment rules, particularly in strategic sectors like high-tech, and a more forthright response to China’s human rights abuses.

Disentangling Germany economically from China will be a difficult and lengthy undertaking. But if the fallout from Russia’s incursion into Ukraine has taught Berlin anything, it should be the importance of prioritizing long-term strategic decision-making over short-term economic benefits.