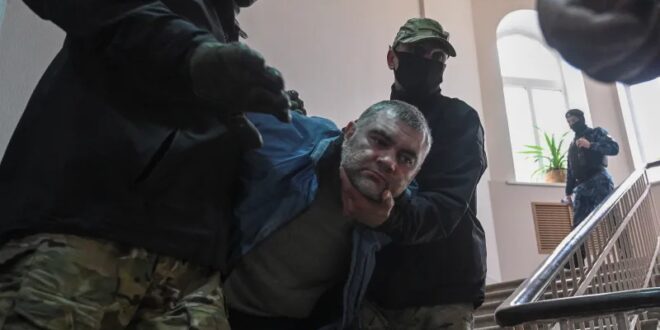 In the Shadow of War, the FSB Embraces Stalin’s Methods

As the FSB spearheads a transformed, increasingly paranoid, and heavily securitized state bureaucracy, the shift has profound implications for the nature of Putin’s rule. In contrast to the largely surveillance-oriented agency of previous years, the FSB has become a far more expansive arm of an increasingly ruthless state. In its sweeping reach into domestic society, foreign affairs, and the military, the FSB has begun to look less like its late-Soviet predecessor, the KGB. It now resembles something much scarier: the NKVD, Stalin’s notorious secret police, which conducted the great purges of the 1930s and maintained an iron lock on Russian society into the early years of the Cold War.

THE LONG REACH OF LUBYANKA
It is not hard to find signs of the FSB’s evolving strategy. Consider its tactics toward journalists and members of the political opposition. In the past, when it came to the press, the FSB limited itself to spying on journalists critical of the government and encouraging them to leave the country. Even when Ivan Safronov, a former journalist who covered the military for the Russian daily newspaper Kommersant, was arrested on treason charges in the summer of 2020, it was understood as a message to the others: stop writing about sensitive issues or leave the country. In fact, the following year, many Russian journalists were placed on a government list of foreign agents but not arrested, and many went into exile. This exodus continued in the opening phase of the war in Ukraine, when hundreds of Russian journalists and activists fled abroad.

Since the spring, however, the FSB has set out to reverse the flow. Two months after the war started, for example, it let in the prominent opposition politician Vladimir Kara-Murza. For years, Kara-Murza has shuttled between the United States, Europe, and Russia, promoting sanctions against Putin’s cronies; since the war started, he has feared that the Kremlin would ban him from entering Russia. But in April, Kara-Murza flew to Moscow and was let in—only to be swiftly thrown in jail, where he has remained ever since, on charges of spreading fake news about the war. In July, another opposition politician, Ilya Yashin, was arrested on identical charges. After Alexei Navalny was arrested and imprisoned—following his own return to Russia in August 2021—Yashin was the most prominent opposition figure; now, like Navalny and Kara-Murza, he has been locked up and silenced.

This is no accident. Starting in May 2022, the FSB has been visiting the families of Russian exiles to convey the message that the Russian government is ready to welcome the exiles back. There are also reports that Russian IT specialists who left Russia at the start of the war but returned have been summoned to FSB headquarters and interrogated: the agency was seeking information in particular about Russian exiles who have stayed abroad. Rather than forcing Russians out, where they may be able to encourage opposition movements, the regime has decided that it would be better to keep them under close watch in Russia—an approach last used by the Kremlin during the early stages of the Cold War.

Shifting tactics, the FSB is luring opposition figures back to Russia and arresting them.
At the same time, the FSB has become bolder in its pursuit of journalists and others who have long been in exile. Here, we can cite our own experience: in March, the internal security department of the FSB initiated a criminal case against one of us, Andrei Soldatov, on charges of spreading fake news about the war, charges that carry a sentence of up to ten years in prison. Soldatov’s bank accounts in Russia have been frozen, and the Russian government has issued formal international warrants to arrest him and extradite him to Russia. The number of Russian journalists who have been threatened with similar charges has only grown. And since most already live in exile, the criminal cases are meant to put further pressure on their relatives back in Russia.

Equally dramatic has been the agency’s growing crackdown on scientists, lawyers, and other Russians who have been involved in activities the regime now regards as suspect. The FSB’s efforts to harass and intimidate Russian scientists who collaborate with foreign research institutions are not new. But since the war began, the FSB has become far more aggressive. On June 30, the agency took extreme action against Dmitry Kolker, the director of the Laboratory of Quantum Optics at Novosibirsk State University, accusing him of treason for purportedly sharing state secrets with China. (He gave a series of lectures in China as part of an exchange program.) Even though Kolker was in a hospital with stage 4 pancreatic cancer, the FSB arrested him and sent him to Lefortovo Prison, where he died three days later. Many Russians were shocked, but this was hardly an isolated incident. A day before Kolker’s arrest, the FSB jailed Dmitry Talantov, a prominent human rights lawyer, who had defended Safronov, the journalist accused of treason by the FSB. Talantov now found himself charged with spreading fake news about the war.

Even mainstream sectors of the Russian economy have come under FSB pressure. Consider Russia’s national health-care system. Since June, the Russian financial monitoring agency, together with the FSB, has investigated medical clinics across the country for prescribing Western drugs rather than Russian ones. The campaign was presented to the public as “cracking down on schemes by foreign pharmaceutical companies that sell their drugs through Russian doctors.” The Kremlin has also asked the FSB to investigate bureaucrats who “failed” to substitute Russian products, like IT technologies, for foreign ones.

The FSB purges have also begun to reach the Russian elite, including senior security officials themselves. In July, three top generals in the Interior Ministry were arrested on embezzlement charges; the operation has been regarded as a message to the interior minister to watch himself—nobody is completely safe in this new security state. This is only the latest in a series of purges that have targeted Oleg Mitvol, a well-connected former prefect of Moscow Precinct, and Vladimir Mau, a leading Russian economist, who is close to the liberal bloc of the government and head of the Presidential Academy of National Economy and Public Administration, the major training facility for Russian bureaucrats. Mitvol was thrown into jail; Mau was put under house arrest—events that have unnerved the Moscow financial elites.

But the most striking change concerns the FSB’s tactics in Ukraine. Before the war, the FSB’s role was mostly to recruit Ukrainian politicians. Now, the agency is running a massive operation to detain large numbers of Ukrainians in Russia and in the occupied territories of Ukraine. The main task of this operation is not to expose Ukrainian terrorists, as the FSB officially claims; rather, it is to process large numbers of Ukrainians in order to recruit assets and send them back to Ukraine, on FSB orders. Nor has the FSB neglected a ruthless pursuit of Ukrainian intelligence agents, as well as the units that defended the Azovstal steel works against an 82-day siege by Russian forces this spring. Along with Russians who are accused of state treason, these high-value Ukrainians have been sent to Lefortovo Prison.

BACK IN THE USSR
The FSB’s sweeping new role raises larger questions about Putin’s regime. For years, it has been well known that Putin has modeled his security services in part on Soviet practices, including those of the KGB, where he spent almost 16 years. For much of Putin’s time in office—and especially over the past five years, as he sought to shore up his regime—the KGB model made sense. For one thing, in the later decades of the Soviet era, the KGB, although it was powerful, remained a comparatively small organization and preferred a light approach to control. It watched and spied on everyone, from factory workers to ballerinas, but the KGB didn’t seek to carry out large-scale arrests or purges. Instead, it relied on sophisticated forms of intimidation that could make people fall in line without mass repression.

In other respects, the KGB was also shaped by the politics of the post-Stalin era. Rather than controlled by a single all-powerful leader, it was a bureaucracy that answered to the Communist Party. And although the agency was omnipresent, it was largely invisible: KGB officers hated military uniforms, preferring gray suits instead. The KGB also invested hugely in public relations, sponsoring books and movies promoting the image of the agency as the most intellectual government entity in the country—the only one that could effectively fight corruption.

During his first 15 years in power, Putin relied on the FSB but tried to distance it somewhat from the KGB. He wanted the FSB to be his rapid-response team, rushing to him with solutions to his political problems, inside and outside Russia. But after the FSB repeatedly let him down—failing to warn him of color revolutions, Moscow protests, and finally, the Maidan revolution in Kyiv in 2014—Putin changed the rules. Instead of having the FSB serve as a rapid-response force, he revised its mandate to something much closer to that of the KGB. He made it an instrument for providing political stability through the intimidation of the Russian people, including elites. But the recent moves suggest that Putin is once again shifting course. Instead of the KGB of the 1970s and 1980s, the FSB increasingly resembles Stalin’s secret services, the NKVD, which aimed to a much greater degree at total control of the Russian population.

PUTIN’S MONSTER
Stalin’s NKVD—the People’s Commissariat for Internal Affairs—was a true monstrosity. Stalin purposely designed the ministry to oversee vast and widely disparate parts of the Soviet state, including the national railway system, Russia’s nuclear program, and the assassination of Stalin’s enemies abroad. The NKVD oversaw police, espionage operations, political repressions, and the Gulag (the Soviet Union’s extensive system of forced labor camps), as well as the construction industry and even public utilities. To conduct internal repressions, the NKVD built up a network of directorates all over the country: to process such large numbers required an enormous security bureaucracy.

The NKVD was also heavily militarized. Not only did NKVD officers wear military uniforms and carry military ranks but the agency also had its own military units equipped with heavy weaponry such as tanks and aircraft. At the end of the 1930s, as war in Europe looked increasingly likely, Stalin put the country on a military footing, beginning with his security bureaucracy. Once the war started, NKVD troops set up camps in the occupied territories of Poland and the Baltics to identify troublemakers and recruit agents. The NKVD was also put in charge of a campaign to get Russian exiles to return to Russia at the end of the war. These were people who had fled Soviet Russia, and many of them were persuaded to return—only to end up in Stalin’s camps. In these and other ways, the NKVD was designed for a regime that was constantly at war: with its own political enemies, with former comrades in the country and abroad, and with the West. And what made the NKVD so powerful—and so feared—was that it answered only to Stalin, not to the Communist Party or the Soviet government.

Since the war in Ukraine began, Putin’s rapidly growing security state seems to be inching closer to its Stalinist predecessor. The militarization of the FSB, its new recruitment camps, its increasingly open and brutal tactics all suggest that Putin is looking more closely at the approach of the NKVD—an agency that was forged by a totalitarian state in wartime. And the long war is what the Kremlin is priming the country for.