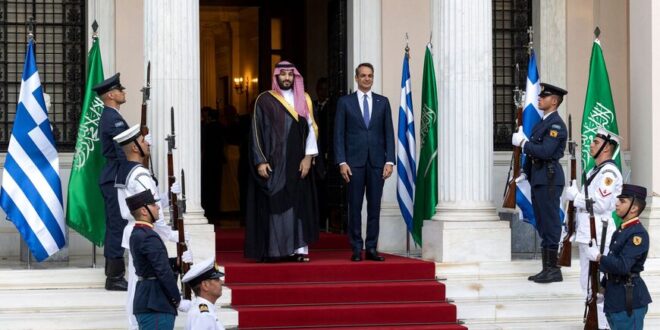 Another purpose of Saudi Crown Prince Mohammed bin Salman’s visit is to seek greater economic and technological cooperation with Greece.

Saudi Arabia and Greece have signed a new energy agreement.

The memorandum of understanding, signed on July 27, establishes a framework for bilateral cooperation on a variety of energy fields, including carbon capture, clean hydrogen, petrochemicals and Saudi electricity exports to Greece, the official Saudi Press Agency reported.

The two countries also announced today a strategic partnership on the building of a data cable project between Europe, Asia and Africa. It will involve Saudi, Greek and Cypriot telecom companies, according to the agency.

Data cables refer to hardware that transmit signals over large distances under the ocean.

Saudi Crown Prince Mohammed bin Salman arrived in Greece on July 26 for an official visit to meet with Greek Prime Minister Kyriakos Mitsotakis. The Saudi ministers of energy and investment are part of the prince’s delegation, as is the governor of the Public Investment Fund. The Saudi-Greek Business Council was also scheduled to meet today to discuss investment agreements in the renewable energy, manufacturing and logistics sectors, also per the Saudi Press Agency. The council was founded in May.

Why it matters: Saudi-Greek relations have improved recently. In 2021, the Saudi and Greek militaries conducted a joint training exercise. Greece also loaned Saudi Arabia a missile defense system that year.

Saudi Arabia’s improving relations with Greece are part of a wider strengthening of ties between Israel, Gulf states, Greece and Cyprus, the DC-based Middle East Institute said in a report last year. The United Arab Emirates as well as Egypt in particular support Greece and Cyprus in their territorial dispute with Turkey in the eastern Mediterranean.

Salman added the Greece trip to his itinerary despite also pursuing rapprochement with Turkey, Fehim Tastekin wrote for Al-Monitor in June.