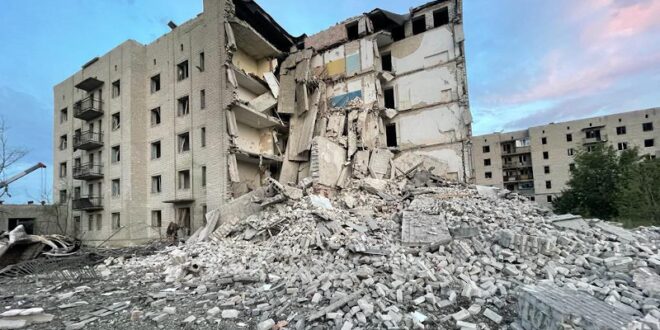 Fierce fighting was under way in Ukraine’s eastern region of Donetsk as Moscow-backed separatists attempted to push back Kyiv’s forces from the cities of Bakhmut and Avdiyivka, while Ukrainian military officials said Russia may launch a fresh offensive in the south.

Several industrial sites were hit in the city, and in the nearby city of Chuhuiv, a rocket hit a five-story residential building.

Ukrainian forces successfully fought off Russian attacks northeast and east of the Donetsk region towns of Soledar and Bakhmut, while fighting was ongoing to the south of Bakhmut, Brigadier General Oleksiy Hromov, deputy chief of the Ukrainian General Staff, said on August 4.

However, Hromov confirmed that Ukrainian troops had been forced to withdraw from the village of Semyhirya and their positions southeast of Avdiyivka.

Hromov told a news conference that Ukrainian forces had recaptured two villages around the eastern city of Slovyansk but had been pushed back to a nearby town after being forced to abandon a coal mine regarded as a key defensive position.

He said Moscow may launch an offensive in the southern Ukrainian region of Kherson to try to win back momentum in the war, and it has been building up forces there.

Russia-backed separatist leaders in the Donetsk region said that Ukrainian shelling had killed at least five people and wounded six in the city of Donetsk.

While the city itself has been controlled by Russia-backed separatists since 2014, the Ukrainian military continues to hold large areas of the surrounding Donetsk region, though Russian forces say they are now making significant territorial gains.

Pavlo Kyrylenko, the Ukrainian governor of Donetsk, said on Telegram that three civilians had been killed by Russian shelling in Bakhmut, Maryinka, and Shevchenko and five wounded in the past 24 hours.

Eight people were killed and four wounded by Russian artillery shelling in the town of Toretsk in Donetsk, Kyrylenko said.

The shelling near the Zaporizhzhya nuclear power plant has already caused concern at the UN’s nuclear watchdog.

Rafael Grossi, director-general of the International Atomic Energy Agency (IAEA), said on August 3 that “every principle of nuclear safety has been violated” at the plant. “What is at stake is extremely serious and extremely grave and dangerous.”

Britain’s Ministry of Defense said in its daily intelligence bulletin on August 5 that Russia’s intentions toward the nuclear plant remain unclear.

However, the bulletin noted, the actions that the Russians have undertaken at the facility have “likely undermined the security and safety of the plant’s normal operations.”

The regional governor in Dnipropetrovsk saidRussia fired 60 rockets at Nikopol, a city across the Dnieper River from the plant, which has been under Russian supervision since Moscow’s troops seized it early in the war.

Some 50 residential buildings were damaged in the city of 107,000, and residents were left without electricity, Valentyn Reznichenko said on Telegram.

“A tense night of alarms and shelling. Two districts of the Nikopol and Kryvorizky regions came under enemy attack,” he said. There were no injuries, but more than 3,000 citizens of Nikopol were left without electricity.

U.S. Secretary of State Antony Blinken has accused Moscow of using the power plant as a “nuclear shield.”

Meanwhile, NATO chief Jens Stoltenberg said on August 4 that alliance members are working closely with defense companies to ensure Ukraine gets more supplies of weapons and equipment to be prepared for the long haul in its war against the Russian invaders.