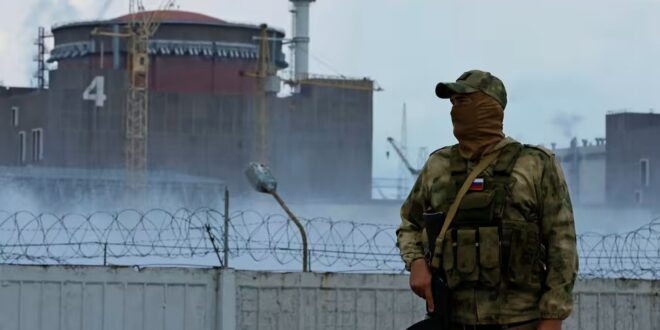 Ukraine’s state nuclear power agency has said that a worker at the Zaporizhzhya nuclear power plant was wounded and radiation-monitors were damaged in renewed shelling of the plant on Russian-controlled territory, while Russian authorities have accused Kyiv’s forces of carrying out the overnight attack.

Enerhoatom said on Telegram on August 7 that Russian rockets had hit a dry storage facility where 174 containers of spent nuclear fuel are stored in the open air.

“Three radiation monitoring sensors around the site of the Zaporizhzhya nuclear power plant were damaged,” the agency said. “Consequently, timely detection and response in the event of a deterioration in the radiation situation or leakage of radiation from containers of spent nuclear fuel are not yet possible.”

One worker was hospitalized after being hit by shrapnel, according to the post.

The Russia-installed administration of Enerhodar in the southeastern Zaporizhzhya region blamed Ukraine, saying that Ukrainian forces had used a multiple-rocket launcher to strike the storage facility.

The incident comes after shelling hit a high-voltage power line at the Zaporizhzhya nuclear plant on August 5, leading Kyiv and Moscow to trade accusations of responsibility and the International Atomic Energy Agency (IAEA) to express serious concern about the risk of a “nuclear disaster.”

The plant, about 200 kilometers northwest of the Russian-held port of Mariupol, has been under Russian supervision since Moscow’s troops seized it early in the war, but Ukrainian staffers continue to operate the facility.

In an evening address to the nation on August 6, Ukrainian President Volodymyr Zelenskiy accused Moscow of shelling the nuclear plant, and said that Kyiv would call for new sanctions against Russia for creating a “global threat.”

“Unfortunately, we have a significant aggravation of the situation around the Zaporizhzhya nuclear power plant,” Zelenskiy said. The Ukrainian president claimed that Russia had become “the first in the world to use a nuclear plant for terror.”

Ukrainian officials said that, as of August 6, the plant was still in operation and no radioactive discharges had been detected.

Russia’s Defense Ministry responded at the time by accusing Ukrainian forces of shelling the plant, and said only luck prevented a radiation leak.

“I’m extremely concerned by the shelling yesterday at Europe’s largest nuclear power plant, which underlines the very real risk of a nuclear disaster that could threaten public health and the environment in Ukraine and beyond,” Rafael Grossi said in a statement.

Grossi urged all sides in the conflict to exercise the “utmost restraint” near the nuclear site.

The IAEA chief added that it was “of paramount importance” that the agency be allowed access to the plant “to provide technical support for nuclear safety and security.”

Grossi said military action near the plant was “completely unacceptable and must be avoided at all costs.”

“Any military firepower directed at or from the facility would amount to playing with fire, with potentially catastrophic consequences.”

Military experts quoted in U.S. media reports have said they believe Russia is shelling the area in the vicinity of the nuclear plant intentionally, knowing that Ukrainian forces cannot risk returning fire because it could damage the reactors or disturb nuclear waste sites.

Post Views: 88
Previous Fighting Rages In Donetsk As Russia Building Up Its Forces In Kherson Region
Next Chinese aircraft, ships and drones circle Taiwan on final day of military drills