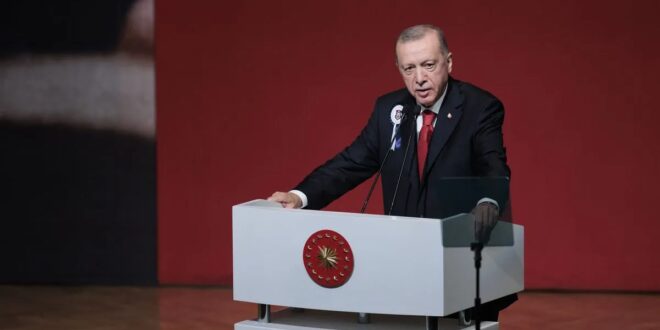 Erdogan: ‘Without Turkiye, NATO is weak’

As Erdogan spoke to journalists following Friday prayer in Istanbul, he commented on NATO’s removal of a tweet about Turkish Victory Day (marked on 30 August) following a Greek complaint.

“Greece’s negative approach to NATO [in relation to Turkiye] does not weaken Turkiye-NATO relations,” Erdogan remarked.

He stated that Greece “has no value” in NATO, adding, “the alliance is strong with Turkiye.”

Turkiye, a NATO member for over 70 years, has complained of repeated provocative actions and rhetoric by Greece in the region in recent months, claiming that such moves frustrate its good faith efforts for peace.

On Tuesday, NATO’s land command, LANDCOM, tweeted a post to mark Turkiye’s 100th Victory Day, which commemorates the resounding defeat of the occupying Greek armies at the hands of Turks in the Battle of Dumlupinar in 1922.

LANDCOM deleted the tweet after Greece had lodged a complaint with NATO Secretary General Jens Stoltenberg.

LANDCOM tweeted on Thursday a new post to congratulate Turkiye on the occasion of Victory Day, expressing: “We are thankful to have Turkiye as our host nation.”