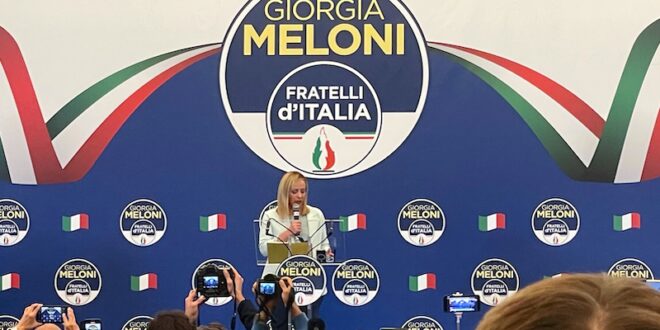 The Sunday general elections that saw a right-wing alliance led by far-right candidate Giorgia Meloni win a resounding majority in both upper and lower houses of the Italian legislative will likely see her national conservative European political family becoming the third-largest bloc in European Council by population.

The win in Sunday’s snap election also means Meloni will probably be Italy’s next prime minister.

Meloni will lead the most right-wing government in Italy since World War II, including Matteo Salvini’s right-wing Lega party, sitting with the far-right Identity and Democracy at the EU level, and Silvio Berlusconi’s centre-right Forza Italia party, a member of the European People’s Party.

“We are the centre, and we are satisfied.” Antonio Tajani, the national coordinator of Forza Italia and ex-European Parliament president, said.

In good news for the centre-right, Silvio Berlusconi, Forza Italia president and founder, was elected to the Senate nine years after being expelled from it in 2013 following a tax fraud conviction.

Meloni is also the president of the European Conservatives and Reformists (ECR) party, of which FdI is a member.

Should Meloni become the next prime minister, her political family is set to become the third largest bloc by population after the social-democrats (S&D) and liberals (Renew Europe) in the European Council, marking a significant shift in the power balance in the EU’s strategic course-setting body comprised of bloc heads of state and governments.

‘If she will have the role, as I think, of prime minister, and if I know her well, her wrists are shaking, but she is ready to lift Italy up,’ said Brothers of Italy senator Ignazio La Russa speaking about Meloni on Porta a Porta tv show on Rai1.

Tajani said Forza Italia does not “have prejudices against Giorgia Meloni, but the decision (on who will be the name indicated for the Presidency of the Council, ed.) will come after a summit of Berlusconi, Salvini and Meloni and with the President of the Republic (Sergio Mattarella) who will have the final say because it is the Constitution that provides for it.”

Only 63.9% of eligible Italians voted to elect the new parliament, while in the 2018 general election, 73.04% cast their ballots.

“The percentage that comes out is about 9% less than in the previous general elections,” was the comment of Interior Minister Luciana Lamorgese.

Meloni said she regretted “the data on abstentionism.”

“The challenge now is to make people believe in the institutions again; too many Italians still choose not to trust them. We must rebuild the relationship between State and citizens”, she said.
The opposition

Centrist and left-of-centre parties will find themselves in opposition after this election. The PD-IDP alliance led by the centre-left PD won 19.5%, just slightly above their poor showing in 2018, when they won 18.8%.

Meanwhile, the Five Star Movement saw its support cut in half to only 16%. The liberal Azione/IV alliance around Matteo Renzi won 7.5%. The left-wing and environmentalist AVS (Greens/EFA, Left) alliance won about 4%; the liberal Più Europa party around Emma Bonino won 3%.

The UKIP-styled Italexit party, favouring Italy leaving the European Union, did not win any seats with only 2% of the vote.

The far-rights rise in Italy has prompted worried reactions from political opponents.

“The role model of Meloni is Orbán, Trump and Mussolini”, Bullmann said, warning that this could have a broader impact on the rule of law in Europe.

“The suppression of diversity in our societies and for European unity, especially in a situation where we are sensitive, fighting against Putin’s war […] the last thing we needed was the ‘Orbánisation’ of a founding EU member state like Italy,” he said.

Bullmann also strongly criticised the support of the centre-right European People’s Party (EPP) to its member Forza Italia which has joined Meloni’s coalition.

“The EPP is not any more a reliable force to defend European values and the future of Europe. You saw that in Sweden, and we may see it in Spain too,” the German MEP said.