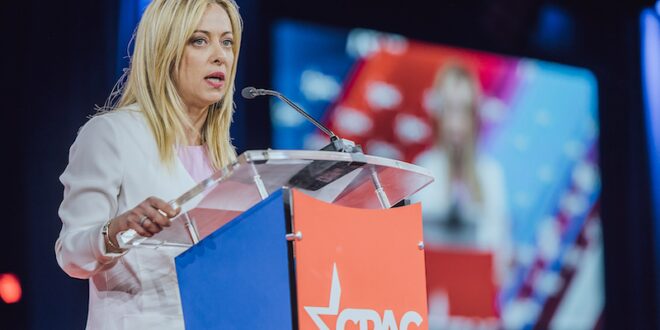 Sunday was an historic election day for Italy. A conservative alliance with a populist flair absolutely trounced the technocrats who had been running the country into the ground for the past several years.

The previous prime minister, former Goldman Sachs banker Mario Draghi, implemented one of the most restrictive – and inhuman – Covid shutdowns, which, along with supporting economically suicidal sanctions against Russia, have left Italy an economic basket case.

Replacing the bland banker will likely be Giorgia Meloni from the right-wing Sons of Italy party. Meloni will be a first for Italy: the first female prime minister. But don’t expect the Left to celebrate it: her name cannot be mentioned in the mainstream media without reference to Mussolini.

Ironically, the democratic victory of Meloni and the rest of the Italian right likely owes a great deal of gratitude to one of Europe’s most undemocratic and anti-democratic leaders: European Union Commissioner Ursula von der Leyen.

On the eve of the Italian elections, the unelected von der Leyen warned Italians that if they voted for the “wrong” parties they would be punished. Asked about the surge of the political opposition in Italy on the eve of the elections, she warned Italian voters, “we will see the result of the vote in Italy. If things go in a difficult direction — and I’ve spoken about Hungary and Poland — we have the tools.”

In other words, her message to Italian voters was “yes you can vote, but if you vote in a way I do not approve of, you will be punished.”

Italians rushed to vote in a way she did not approve of. It will be interesting to see what happens.

How does any of this relate to the United States as the US moves closer to the midterm elections? Americans have also been given warnings by the political elites that they dare not vote for the “wrong” candidates or parties.

On September 1st, President Biden issued a warning similar to that of Europe’s von der Leyen. In one of the most bizarre speeches in political history, Biden warned that Trump supporters “…are determined to take this country backwards — backwards to an America where there is no right to choose, no right to privacy, no right to contraception, no right to marry who you love. They promote authoritarian leaders, and they fan the flames of political violence that are a threat to our personal rights, to the pursuit of justice, to the rule of law, to the very soul of this country.”

He spoke on a frightening, red-lit stage with US Marines serving as props on either side of him. This was no “Checkers” speech with Nixon speaking wistfully about his cocker spaniel. No, it was a declaration of war against half of the country.

A few weeks ago Sweden threw its left-wing government out and Sunday the Italians did the same. While the political differences in Europe seem more cosmetic than substantive – for example Italy’s presumptive new prime minister supports weapons to Ukraine just like her predecessor – there is still a strong feeling of popular revolt against political elites in the air.

That doesn’t mean things will easily go our way, as there is no automatic libertarian surge. But we must study hard and take advantage of every single opportunity. People are sick of the elites? That means they are likely open to the concepts of non-interventionism and sound money. Let’s help educate them!