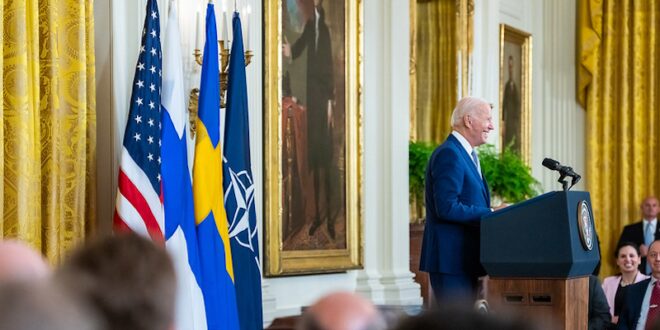 Within days of each other, revealing portraits of the United States and China have been unveiled. In Washington, the Biden administration released its national security strategy. It says much about American psychology at a critical juncture. And Beijing witnessed the opening of the 20th Party Congress on 16 October that will see Xi Jinping confirmed as president for a record third term.

It comes as the White House launches arguably its biggest move to compete with, and restrain, China in its technology war, curbing the ability of world and US chip makers to sell semiconductors and chip-making equipment to Chinese customers. As Bloomberg notes, it strikes at the foundation of China’s efforts to build its own chip industry.

This represents a dramatic escalation in technology decoupling and has been met with a forceful Chinese response. Furious officials in Beijing already threaten economic retaliation.

With Trump’s trade tariffs still in place, Beijing has no doubt that the US is out to cripple its capacity to compete on equal terms. On top of its property crash, strains arising from Xi’s zero-COVID-19 policy and slowing economic growth, it is not the atmosphere Xi desired to shadow the Congress.

Biden’s national security strategy is, like those of his predecessors, sonorous in style and pronouncement. It puts America on a footing for what the president calls a moment of ‘inflection’ for the world, a ‘decisive decade’ for the United States.

Crucially, it projects humility about past failures. Washington stresses it has learnt from mistakes, delivering a relieved farewell to the post-Cold War era. Even more remarkably, it appears to have relinquished the goal of democracy promotion. ‘We will not use our military to change regimes’, it says, ‘or remake societies’. This is the sharpest break of all. Largely missing is Biden’s pre-election stress on a ‘foreign policy for the middle class’. The shackles, it seems, are once more off.

This remains an America that will not easily — if ever — embrace the prospect of being a ‘normal’ nation, or even just a conventional great power. To do so would be to deny the very essence of what makes them Americans.

The enterprise sketched by US policymakers in this strategy remains vast and all-embracing. It touches all corners of the globe, embraces a panoply of policies. The community of nations, it assumes, in a statement that could have been uttered by Woodrow Wilson in Paris in 1919, ‘shares our vision for the future of international order’.

The mental map of the old Cold War with all its obvious contradictions still has a powerful hold. Though divine providence is not openly summoned, its pulse quickens the American system, fuels its self-belief. ‘Primacy’, appearing only once in the document, is no longer the beating heart of US grand strategy. But its replacement, namely ‘out-competing’ Russia and China, carries the same meaning, even as it commits to avoiding the ‘temptation to see the world solely through the prism of strategic competition’.

Indeed, in looking to eschew the notion of a new Cold War and resist a world of ‘rigid blocs’, the document remains a manifesto for the very binary Biden declared at the outset of his presidency — that between democracies and autocracies.

In doing so, the strategy is in some ways reminiscent of former US diplomat George Kennan’s Long Telegram from Moscow in 1946 — which essentially established the intellectual basis for containment of the Soviet Union. Biden’s document similarly depicts Russia and China as beset by problems associated with ‘the pathologies inherent in highly personalised autocracies’ that are ‘exporting an illiberal model of international order’.

This is a key judgment of the strategy — Russia has proven form in its invasion of Ukraine and ‘imperialist foreign policy’, and the China threat is depicted as spreading.

But older rhetorical threads are also woven through the document’s fabric, from presidents Truman through to Kennedy and Nixon. There are echoes of Truman’s speech to Congress in March 1947 in its pledge to ‘defend democracy around the world’. There are strains of Kennedy’s inaugural address in January 1961 in the strategy’s commitment to ‘support every country in exercising the freedom to make choices’. And more than a dose of Richard Nixon’s call from Guam in July 1969 — at another moment of relative American vulnerability — for even greater allied burden sharing.

It is worth recalling that after World War II, the United States made a deliberate choice to do everything it said it would never do. It entered into the very kind of ‘entangling alliances’ of which George Washington warned in his farewell address. It had dealings with corrupt one-party states and authoritarian regimes where it saw fit. And it stationed troops in military bases all around the world.

In early 1947, the esteemed American foreign affairs columnist Walter Lippmann warned that containment had created a ‘strategic monstrosity’. It would compel the United States to embark on an unending series of interventions around the globe.

Lippmann reminded Kennan that ‘the history of diplomacy is the history of relations among rival powers which did not enjoy political intimacy, and did not respond to appeals to common purposes’. Nevertheless, he added, ‘there have been settlements. Some of them did not last very long. Some of them did’. But ‘for a diplomat to think that rival and unfriendly powers cannot be brought to a settlement is to forget what diplomacy is all about’.

That is the very kind of advice all but ignored in Beijing and Washington today.