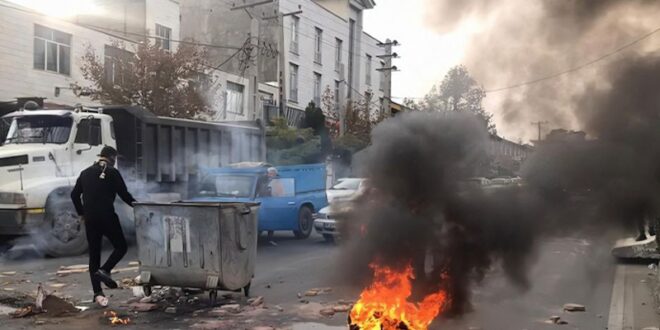 Iran’s continuous nationwide uprising continued for the 35th day Thursday as anti-regime protests escalated in the form of night rallies in several cities.

Protests in Iran have to this day expanded to 193 cities. Over 400 people have been killed and more than 20,000 are arrested by the regime’s forces, according to sources of Iranian opposition People’s Mojahedin Organization of Iran (PMOI/MEK). The names of 241 killed protesters have been published by the PMOI/MEK.

In the morning, strikes continued in several cities, including Firuzabad, south-central Iran, where store owners closed their shops in solidarity with nationwide uprisings and in protest to the regime’s brutal crackdown on demonstrations.

In Mashhad, medical personnel gathered in front of the Medical Council and chanted slogans against the regime, including “Death to the dictator!” and “We don’t want a child-killing government!” referring to the regime’s murder of schoolchildren and youth during the protests that have lasted over a month. The demonstrators also shouted slogans against the crackdown and arrest of university students, chanting, “Iran has become a prison! Evin [Prison] has become a university!”

At night, protests took place in several cities. In Mahabad, protesters lit fire in the streets to prevent the movement of security forces. In Tabriz, protesters blocked roads and chanted, “Death to the dictator!” calling for regime change.

On Wednesday, protest rallies began with students holding gatherings and protest marches in several cities. High school students in the cities of Tehran, Sanandaj and Bukan, students of Zahedan University of Medical Sciences, and students of Razi University in Kermanshah rallied against the mullahs’ regime and voiced their support for the ongoing uprising.

Storeowners in the cities of Mahabad, Bukan, and Divandarreh closed their shops and went on strike in support of the country’s anti-regime protests against the rulers in Tehran.

With nightfall, protesters took to the streets again and began establishing roadblocks with fires to take control of their streets and neighborhoods. Locals in the cities of Sanandaj, Dehgolan, Kamyaran, Ilam, Kermanshah, Mahabad, Bandar Abbas, Darreh Shahr, near Saveh located south of Tehran, and Tehran itself people were seen starting fires and standing their ground in the face of attacks by the regime’s security forces. This is becoming a growing trend in many cities across the country and evolving into a major security concern for the mullahs’ regime.

Iranian opposition NCRI President-elect Maryam Rajavi held an online meeting with members of the of the British Parliamentary Committee for Iran Freedom, in which she called on support for “Iran’s uprising for the overthrow of the religious fascism,” adding the Iranian people have risen up against the mullahs while the regime’s suppression has not stopped the ongoing protests. “The wall of fear has cracked,” she highlighted.

These protests began following the death of Mahsa Amini. Mahsa (Zhina) Amini, a 22-year-old woman from the city of Saqqez in Kurdistan Province, western Iran, who traveled to Tehran with her family, was arrested on Tuesday, September 13, at the entry of Haqqani Highway by the regime’s so-called “Guidance Patrol” and transferred to the “Moral Security” agency.

She was brutally beaten by the morality police and died of her wounds in a Tehran hospital on September 16. The event triggered protests that quickly spread across Iran and rekindled the people’s desire to overthrow the regime.