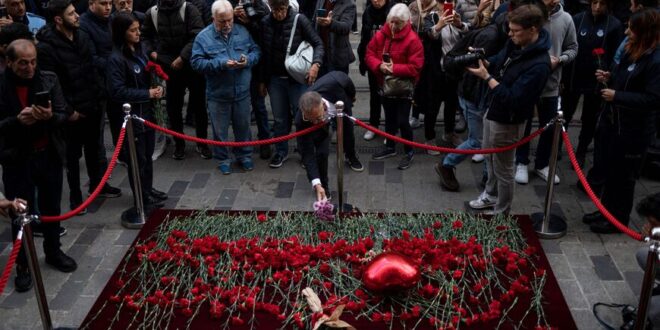 At 15:17 p.m. Sunday, a CCTV camera picked up a woman in black hijab and tight camouflage pants walking at Taksim Square. A few minutes later, another camera caught her shopping in a store on Istiklal Street. After sitting on a bench for about 45 minutes, at 16:11 she took out two red roses from her bag and walked away, leaving her bomb-laden backpack behind. At 16:14, as people around her look in the direction of a powerful explosion, she runs back, holding the roses.

She is identified as a foreign national carrying a Syrian passport registered under the name of Ahlam Albashir.

Sunday’s bombing attack rocked the country, killing six people including a 9-year-old girl and wounding 81, only some six months ahead of Turkey’s elections.

A Turkish court today arrested 18 people, including Albashir, on several charges. The court released three suspects under judicial control and 29 others were sent to the deportation center, Turkish media reported.

One of the arrestees, who was identified as the employer of Albashir, had a brother who was killed while he was fighting in the YPG, Turkish media reported, citing Anadolu.

Earlier in the week, police rounded up more than 50 people suspected to have been involved in the attack. One of the arrestees was reportedly caught in the northern Syrian town of Azaz and then taken to Turkey.

As Ertan previously reported, Albashir admitted to planting the bag and told the Turkish police that she was trained as an intelligence operative by the YPG. She later claimed she didn’t know what was inside it. Today, Turkish media released two new footages of her taking pictures on Istiklal on two different dates a couple of weeks before the attack.

Turkish media reported that she entered Turkey through the Syrian border province of Hatay on July 27 and traveled to Istanbul with a man identified as Bilal Hassan, a Syrian national. Albashir reportedly told the police that they were acting under the instructions of a Syria-based man who was only identified by his code name, “Hadji.”

Hassan, who along with “Hadji” stands out as a key suspect in the attack, is believed to have fled the country through the northwestern province of Edirne, after accompanying Albashir to the Taksim square on the day of the attack in a white jitney cab.

The attack has increased the already-high anti-refugee sentiment in a country which hosts more than 4 million refugees. The government has come under fire from several fronts over its “open door” policy, which critics argue allowed millions of people into the country in an uncontrolled manner.

Turkish authorities have also been criticized over their handling of the investigation. “I believe it’s premature to reveal the names of organizations [behind the attack] by relying on the [suspects’] confessions,” Cevat Ones, a former deputy intelligence director, told daily Evrensel.

As Ertan observed, “the attack has also appeared to revive the rhetoric pushing for a new military operation in northern Syria to establish a ‘safe zone’ along the entirety of the Turkey-Syria border.”

“All terrorist organizations, first and foremost, PKK/YPG” which has been “cornered in northern Iraq and Syria” would “pay the price of this attack which brutally targeted innocent civilians in Istanbul,” the Defense Ministry said in a statement. “They will disappear from this country and this geography.”

Devlet Bahceli, the leader of the Nationalist Movement Party and Erdogan’s political ally, called for the closure of the pro-Kurdish Peoples’ Democratic Party (HDP).

The MHP has found itself in a hot spot after one of its local officials in Turkey’s predominantly Kurdish southeastern province of Sirnak was questioned by police over several phone calls between a phone line used by Albashir and a line registered under his name in 2019. The party first denied the reports, saying the confusion stemmed from a name similarity. But MHP official Mehmet Emin Ilhan later confirmed that he was questioned by police, saying that the line was obtained through a stolen copy of his ID.

Erdogan targeted the PKK without naming it. “We will continue to resolutely implement our strategy of eliminating the terrorist threats at its very source,” he said Wednesday, in response to a question whether Turkey was considering a new military operation in Syria after the attack.

“Those who support the terrorist organizations under the pretext of fighting [Islamic State] are unfortunately becoming accomplices in every drop of blood that has been spilled,” he added, in an apparent reference to the Washington’s support of the Syrian Kurdish groups that Ankara accused of organizing the attack, but striking an unusually veiled tone.

Interior Minister Suleyman Soylu, however, likened Washington’s condolences over the attack to a “murderer’s return to the scene of the crime.”

Yet, as Ertan reported, shortly after his meeting with US President Joe Biden on the sidelines of the G-20 summit in Indonesia, Erdogan tweeted a “thank you” message with the flags of all the countries that have offered condolences, prominently including the American flag.

The seemingly differing tones of Erdogan and Soylu have led to speculations over possible disagreement within the government’s ranks, particularly when “some observers have noted a softening of the government’s stance toward the HDP,” Andrew Wilks reported Thursday, listing a series of olive branches Erdogan extended to Kurdish voters.

On the international front, Erdogan further enjoyed the international spotlight as he met with Biden and several other foreign leaders at the G-20 summit with praises pouring in for Turkey’s role in extending the grain deal between Russia and Ukraine and bringing Russian and American spy chiefs to the same table in Ankara, as we reported here.