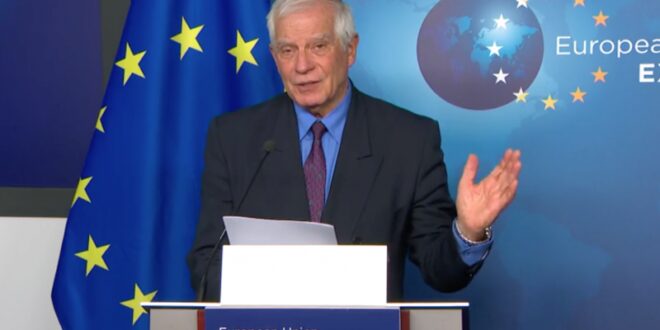 The EU warned of “escalation and violence” on Monday (21 November) after Serbia and Kosovo failed to reach a deal in emergency talks in Brussels to end their long-running dispute over car license plates used by the ethnic Serb minority in Kosovo.

“After many hours of discussion (…) the two parties did not agree to a solution today,” the EU’s chief diplomat Josep Borrell told reporters in Brussels after fruitless talks that lasted more than eight hours.

“Both bear full responsibility for the failure of the talks today and for any escalation of violence that might occur on the ground in the following days,” he said.

Tensions between Belgrade and its former province, which declared independence in 2008, have flared up in recent months, threatening to become the most serious crisis between the two sides in recent years.

Kosovo, which remains unrecognised by Serbia and is home to a majority ethnic Albanian population, wants all citizens, including some 10,000 Kosovo Serb car owners still sporting Serbian plates issued before 1999, to replace them with Kosovo Republic plates.

This plan has been met with strong and sometimes violent resistance by Serbs living in the northern part of the country, which Kosovo said has been largely stirred by Belgrade.

Since 1 November, when Pristina started implementing the step-by-step plan for the re-registration of cars with illegal Serbian license plates, tensions between Kosovo and Serbia have increased.

Ethnic Serbs who live in northern Kosovo refuse to recognise Pristina’s authority and still consider themselves a part of Serbia. Several hundred police officers, judges, prosecutors, and other state workers from the Serb minority quit their jobs earlier this month.

Borrell said the EU had put forward a proposal that could have avoided further escalation, which was accepted by Serbian President Aleksandar Vučić but not by Kosovo Prime Minister Albin Kurti.

“The Serbian side was completely constructive, and we were accepting the texts that were changed 10 times, but the Albanian side did not want to accept anything, not for a second, they would always add something that was clearly not possible,” Vučić told reporters after the meeting in Brussels.

Vucic also said he intends to address the nation either on Monday evening or Tuesday.

Kurti, for his part, said he was ready to hold further meetings to normalise relations between Belgrade and Pristina, but not just to deal with one single issue.

“We cannot turn ourselves into state leaders that are dealing only with car plates and are not talking about how to normalise their relations,” Kurti told reporters in Brussels.

The EU’s lead foreign affairs spokesperson Peter Stano told reporters that “any claims that the EU is giving up on its proposal on normalisation of relations between Kosovo and Serbia, which is supported by Germany, France, and the US, are untrue”.

The EU side, he added, expects both sides “to avoid escalation, which requires immediate action from both Parties – Kosovo not to start issuing fines and Serbia not issue new KM plates”.

“There cannot be any negotiations on normalisation of relations with a threat of violence present,” Stano added.

The phased plan includes warnings, fines and eventually driving bans for refusing to switch plates with the total ban to come into force in April.

Speaking to reporters in Brussels after the meeting, a disappointed Borrell said he would inform EU member states of the two countries’ “lack of respect for their international legal obligations, and this goes in particular for Kosovo”, warning that, given their commitment to joining the bloc, they should act accordingly.

“This sends a very negative political signal,” Borrell said, adding the current situation would be worse than it was earlier this year in August.

“I made it very clear to both leaders that if EU accession is their ultimate objective, one to which they have both committed, we expect them to act accordingly with that. From my side, I will keep the dialogue very high on my agenda,” he added.

He called on Kosovo to immediately suspend further steps related to the re-registration of vehicles in north Kosovo, and on Serbia to suspend issuing new number plates, allowing both parties “space and time to look for a sustainable solution”.