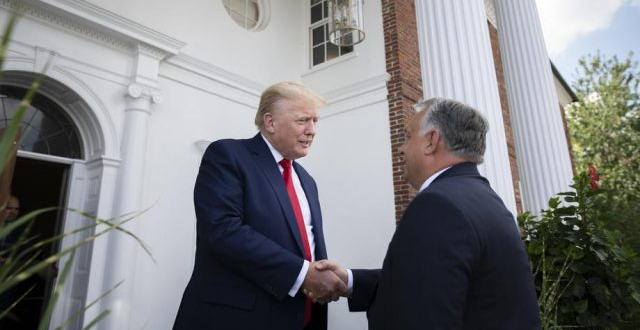 AMERICA IS NOT GOING ORBAN’S WAY

The US midterm elections went badly for Trump. That spells trouble for Hungary’s prime minister, who has foolishly gambled on a Trump return.

As the only remaining superpower, the elections in the US are the most consequential for countries outside of their own, in particular for the future of the community of democracies around the world. And this year’s midterm elections were arguably more important than most. It was not just a contest between the two main US political parties – the Democrats and the Republicans – it was also a vote on the influence of Donald Trump, the disruptor, the irresponsible and uncontrollable former president. With some exaggeration, the future of the “American Idea” hung in the balance.

Americans defied the pessimists. The majority voted on November 8 for a more balanced politics, rejecting stupidity and extremism. Trump suffered the biggest hit: most of the candidates he embraced, supported or outright chose were defeated by moderate, centrist, mainstream Democrats. Trump’s stranglehold on the Republican Party has loosened, at least for now. He is no longer the uncontested leader or “owner” of the Republican brand.

The results will no doubt have consequences for other illiberal leaders around the world, including Hungarian Prime Minister Viktor Orban, who had pinned all his hopes on a strong showing for Trump-supported candidates. It begs the question, then, what the poor result in the midterms will mean for the Trump-sycophant, who is practically the only head of government in the transatlantic community to openly root for Trump.

Back to the centre

At the midterms, the Democrats held onto the Senate, while the Republicans squeaked out a thin majority in the House of Representatives. Crucially, Democrats fared well in the gubernatorial races. In New York and Michigan, the sitting governors, Kathy Hochul and Gretchen Whitmer respectively, were easily re-elected. Arizona chose moderate Democrat Katie Hobbs over the Trump-backed extremist “election denier” Kari Lake. In Maryland, Democrat Wes Moore romped home with 62.5 per cent of the vote.

All in all, a strong message to the world was sent out about the resilience of US democracy but also the desire of the majority of Americans to move to the centre. Extremists fared worse than moderates.

Perhaps the most consequential news came out of Florida, where the Republican governor, Ron DeSantis, was re-elected with a 20-point majority. As the third largest state and the arguably the most important swing state, Florida makes DeSantis a serious contender for the Republican nominee for the 2024 presidential election. Trump just might have met his nemesis in the Republican Party.

Yet DeSantis is not guaranteed to win the primaries, there will be others as well as Trump, who already announced his candidacy on November 16. To paraphrase the famous saying about Las Vegas: what happens in Florida could stay in Florida – DeSantis’s success might remain a “local” victory given the national electorate is quite different.

Thus, it is important to keep in mind that Trump and Trumpism is not yet dead. While a healthy process of redefining the Republican Party has finally begun after the 2020 presidential election loss, it is far from clear what will unfold. Whether mainstream Republicans will be able to regain leadership of the party, or if the populists will dominate. Trump will be a force to be reckoned with, one way or the other – unless the Republicans themselves decide he should disappear from politics. It is an unknown how the Republican base will respond to the midterm results. And we don’t know how the Democrats and Joe Biden himself will interpret the party’s better-than-expected showing. Hopefully with humility, caution and a sense of realism.

For the world, the message is that Joe Biden will not be a lame duck president for the next two years. He can largely continue his agenda. He is the president of the United States, period. While an unfriendly House of Representatives will likely cause lots of headaches for the president, he does not have to fear the promised “indictment” by Republicans, as the Senate is safely in Democratic hands. If my optimism prevails, deals will be made across the aisle.

Optimism is in shorter supply when it comes to the Hungarian prime minister. Orban has repeatedly let it be known that he has high hopes for a second Trump presidency. He peddles the lie that the “relationship between Hungary and the US has never been as good as during Trump’s presidency”.

Orban has also made clear his disdain for Joe Biden. He openly works against the transatlantic alliance, thus US interests, in the international arena. And he shamelessly pushes the Russian narrative on its war of aggression against Ukraine. He is a disruptive force within NATO and the EU.

Orban’s strategy has been plain: wait for the next US presidential election in 2024, when – it is hoped – Trump will return triumphant. Yet that kind of strategy is called gambling. It’s also called (no pun intended) Russian roulette, for it could easily end up blowing up in his face.

Right now, the outcome of the 2024 election – and even the Republican nomination – is little more than a toss-up. Two years is a long time, and the Trump brand has taken a big hit recently, from which he might never recover.

With the rise of Ron DeSantis, Orban has a serious dilemma: either abandon his BFF, his pen pal, his idol Donald Trump, risking his wrath; or stick with him in the belief that raising the stakes in the proverbial game of roulette will result in an even bigger reward in the event the Republicans pick Trump and he goes on to win the presidential election.

Taking sides early in such an election is not a smart idea. Making an enemy of any potential president can poison the relationship in the long term. In diplomacy, this is critical; in the relationship with the US, it can be disastrous.

While DeSantis is a populist, embracing many of the ‘Orbanesque’ illiberal ideas, he’s hardly likely to embrace Orban given the Hungarian premier’s close relationships with Russia’s Vladimir Putin and China’s Xi Jinping.

Even were Orban to abandon Trump in favour of DeSantis, the Florida governor might well still regard him as a liability and an embarrassment – unless Orban openly and unequivocally abandons his friendships with Putin and Xi. Yet that would be hard – and not just for him. His long-serving foreign minister, Peter Szijjarto, for example, would probably have to hand back the Russian Order of Friendship he received recently from his counterpart Sergei Lavrov. Furthermore, if DeSantis is serious in his ambitions, he will have to appeal to more moderate voters as well. Hardly good news for Orban.

So Orban will have to make tough choices; he can’t have it both ways. He needs to closely watch the debates going on within the Republican Party, between the Trump Republicans and the Reagan Republicans. He should monitor Republicans like Congresswoman Liz Cheney, who was vindicated by the midterm election results. The conservative Republican from Wyoming, was prevented by Trump from running for office this time around, but she is not going away and could lead the charge for a renewal of the Grand Old Party. She is a conservative and Republicans like her are not amenable to Viktor’s love affair with Donald, his foreign policy or his illiberal thinking.

Difficult times require innovative thinking, yet Orban and his diplomats hang out mostly with like-minded populists in America, who themselves misread the mood of the country by backing Trump and his “Big Lie” narrative over the 2020 election.

The role of diplomats is to be the eyes and ears of a country. Yet during the 12 years of Fidesz rule, Hungarian diplomacy, once admired around the world, has been degraded, serving not the country but merely Orban’s megalomania. Diplomats who dare confront Orban with reality are at times, without notice, kicked out the foreign service.

The US midterm elections were not good news for Viktor Orban. The events also send out a clear warning to others, especially those in Central and Eastern Europe, who see him as an example to follow.

Post Views: 79
Previous ‘Tale of Two Sophias’ Portrays Hope for Albanian-Serb Relations
Next Italy as Inspiration for the Balkan Far-Right