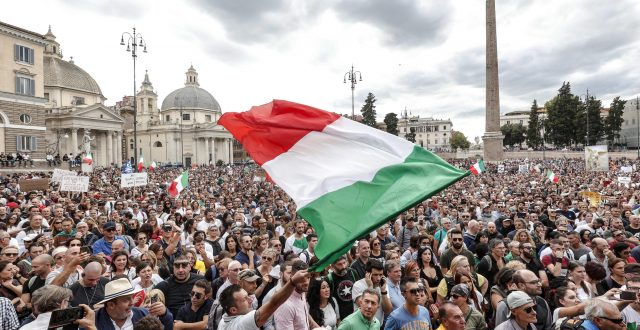 Far-right groups in the Balkans have long had a soft spot for the Italian fascism of the past. The new government in Rome can provide fresh inspiration.

The end of the COVID-19 emergency, the outbreak of war in Ukraine, and the inflation crisis in Europe have all boosted support for right-wing politics, as demonstrated by the recent Italian election won by the right-wing coalition led by Fratelli d’Italia [Brothers of Italy].

In the Balkans and elsewhere, far-right groups are not only responsible for attacking minorities and political opponents, but also for creating and transferring knowledge that allows fascist ideologies to spread in society.

It’s worthwhile taking a look at how Albanian and Serbian far-right groups and their leaders position themselves vis-à-vis fascism as an historical phenomenon and as a contemporary movement, as a way to understand how Italian fascism of the past and present influences far-right politics in the Balkans.

Let’s start with Albania, where there has been relatively little study of far-right groups.

Pozicioni i Tretë Shqiptar, or Albanian Third Position, ATP, is a neo-fascist organisation inspired by the writings of Julius Evola and by the former Italian far-right para-terrorist organisation Terza Posizione.

ATP’s objective is to reinvent a tradition of fascist thinking and politics that were essentially wiped out overnight in 1944 when the communist regime of Enver Hoxha came to power.