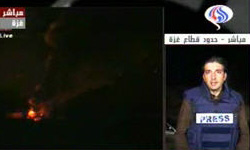 The man’s lawyer said the Palestinian was also suspected of passing confidential information to unauthorized persons – “a very harsh security offense” – but gave no further details.

Khadr Shahine, who reported for Iran’s state-owned Arabic language Al-Alam television station, violated the censorship rules when he reported the beginning of Israel’s ground offensive against the Gaza Strip before it was permitted by military censors, Israeli authorities claimed.

Shahine turned himself in Tuesday after hearing police wanted to question him, his lawyer said.

Shahine’s lawyer, Mohammed Dakhleh, said his client was being held on suspicion of passing confidential information to unauthorized persons.

“This is a very harsh security offense,” he said, adding that it was the first time it had been used against a journalist.

Dakhleh said Shahine has long worked as a journalist, including during the 2006 war between Israel and Hezbollah in Lebanon.

“It’s basically persecution because the guy has been giving TV items for years now,” Dakhleh said.

Israel’s military censor has broad powers to shut down media outlets or imprison journalists to prevent the release of information deemed threatening to the Zionist regime’s security.

“A guy who supplies information for Iranian television is being questioned by police for suspected censorship violation,” said Daniel Seaman, the head of Israel’s Government Press Office.