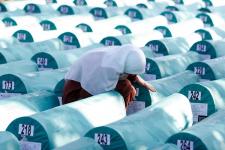 The European Parliament adopted a resolution calling all European Union member states to recognize July 11, the date of the start of the1995 Srebrenica massacre, as “a day of commemoration throughout the EU”.

On July 11 1995, Bosnian Serb forces led by Ratko Mladic killed more than 8,000 Bosniak (Bosnian Muslim) men, hunting them down as they fled the ‘safe haven’ town of Srebrenica in the worst atrocity in Europe after World War II. The name of the town has become a byword of genocide and a symbol of the horror of Bosnia’s 1992-95 war.

“Urging all countries, including those of the western Balkans, to do the same, the Parliament commemorates and honors all the victims of the atrocities during the wars in the former Yugoslavia and expresses its condolences to and solidarity with the families of the victims, many of whom are living without final confirmation of the fate of their fathers, sons, husbands or brothers”, the European Parliament said in a statement.

The victims’ bodies were first buried in mass graves, then dug out with bulldozers and moved to smaller graves. Remains can be scattered in several locations, and are not released for burial until two-thirds of the body have been recovered.

“The EP stresses that reconciliation is an important part of the European integration process, a process in which the religious communities, the media and the education system play a significant role”, the Parliament added, noting that bringing to justice those responsible for the massacres is an important step towards peace and stability in the region.

Mladic, who is indicted by the Hague war crimes court on two counts of genocide for Srebrenica and the siege of Sarajevo, is still at large. The tribunal believes he is hiding in Serbia aided by hardliners in the army and police, and Belgrade’s future progress towards EU membership depends on his arrest. Mladic’s political boss, former Bosnian Serb president Radovan Karadzic, is currently held in the Hague tribunal detention unit, awaiting the start of his trial on the same charges.

The resolution was adopted with 556 votes for, 9 against and 22 abstentions.
Amir Kulagic, a survivor of the Srebrenica genocide, expressed concern that the resolution may end up being implemented by Western European countries only, while countries in the region, “and in particular Serbia, will not honour the commemoration day”.

“I think that the European Parliament’s decision means a lot in terms of moral satisfaction. However, this is just one small drop in a large ocean, because there are so many things that Europe should do for
the victims of the Srebrenica genocide,” Kulagic told BIRN – Justice Report.

European Parliament Spokesperson Thomas Dudrap told BIRN – Justice Report that the resolution had been placed on the agenda of the first Parliament session of the year because the mandate of the Parliament in its current composition is due to expire in June 2009.

He said the resolution was drafted following a meeting between European Parliament President Diana Wallis, who is from the liberal and democratic grouping, and members of the Association of Mothers from Srebrenica and Zepa. Wallis and Jelko Kacin, a Slovenian delegate and the rapporteur on Serbia, attended the commemoration organized in Srebrenica last year.

Explaining the draft Resolution, Kacin said that “we must build Srebrenica in our common historical memory”. He said the resolution was not intended for the past, “although it speaks about the dead”, but is relevant to “the living and their better future”.

“This Resolution is not sufficient. We must speed up the trials system in order to make sure that all participants in the genocide will appear before the court of justice,” Kulagic said.

Kulagic said Bosnia should have adopted a resolution on genocide before the European Parliament, though he acknowledged that “knowing how the political forces in Bosnia and Herzegovina act, I am sure that the Srebrenica genocide will be politicized.”