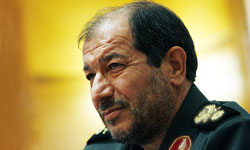 Najjar and his Tanzanian counterpart Hussein Ali Mwinyi, in their first round of negotiations, stressed on bilateral defense relations, a statement by the defense ministry said.

He also explained Iranian defense industries’ potentials and capabilities in different grounds, and said that Iran is ready to transfer defense and military experiences to Tanzania.

Referring to Israeli assault on Gaza and genocide of Gazans, he added, “Resistance repeated the nightmare of the 33-day war on Lebanon for the regime (Israel) once again”.

Najjar described Israeli use of Phosphorous bombs against the defenseless people of Gaza as “war crime”.

Tanzanian defense minister, for his part, expressed satisfactions over his trip to Tehran, and further laid emphasis on expanding bilateral relations with the Islamic republic of Iran.