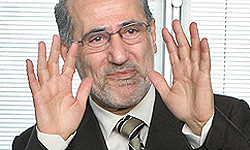 “Iraq has made a decision for Ashraf camp and will implement it firmly,” Rubaie told reporters following his arrival at Tehran’s Imam Khomeini International Airport.

Elsewhere, the Iraqi official pointed out that “my trip comes in line with an agreement made between Iran and Iraq during Maliki’s visit.”

He indicated that the most important goals pursued in the said agreement are deepening bilateral relations and strengthening relations in line with enhancing political relations.

“I must appreciate the Islamic Republic of Iran’s efforts for the promotion of stability and security in Iraq,” he added.

Rubaie further described non-interference in internal affairs of either country as the most important aspect pursued in Iran-Iraq bilateral relations.

Responding to an FNA question about the fate of the five Iranian diplomats currently in US custody in Iraq, the Baghdad official said that the diplomats will be freed when US transfers them to Iraqi government.

The United States has repeatedly claimed that the government in Baghdad does not intend to expel the terrorist MKO, but Iraqi officials have on different occasions stressed that the group cannot perceive any future for its members in Iraq.