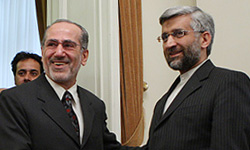 “Ways and means required for enhancing and consolidating high level joint security should be provided through the establishment of joint working groups,” Jalili said.

Referring to the age-old, deep and interwoven relations of Iran and Iraq, Jalili added, “Security of Iran and Iraq is a mutual and interrelated issue and any opportunity or threat for each of them influences the other country automatically.”

He reiterated that positive trends in the political process of Iraq will secure the way for further progress in other arenas, mentioning that promotion of Iraq’s security will pave the way for the enhancement of bilateral ties between Tehran and Baghdad.

Referring to the measures adopted by the Baghdad government against terrorist groups, he stressed his country’s serious intention for a strong confrontation with the terrorist group, and said, “Using Iraq’s soil against Iran’s security will never happen again.”

Rubaie also stressed on Monday that Iraq is serious about implementing its decision for closing the headquarters of the anti-Iran terrorist group, the Mojahedin-e Khalq Organization (MKO), in Diyala province.

“Iraq has made a decision for Ashraf camp and will implement it firmly,” Rubaie told reporters following his arrival at Tehran’s Imam Khomeini International Airport.