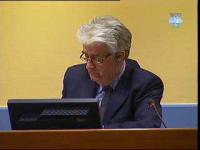 War crimes suspect Radovan Karadzic said NATO forces conducted a “Gestapo-like attack against his home and family” in December last year as part of the search for the two remaining fugitives, Ratko Mladic and Goran Hadzic.

Karadzic, indicted on two counts of genocide for his role in the 1992-95 Bosnia war, was arrested in Belgrade in July last year. Appearing at a status conference before the pre-trial chamber of the Hague tribunal, he said that on December 2, 2008 NATO forces searched his family’s house in Pale, acting “on a warrant issued by the Hague Court”, on what he said was “an attack against his family.”

“During the course of the search they spoke to my wife about the two indictees’ mental health, although they had never been her patients,” he said of his wife Ljiljana, a psychiatrist.

“Due to a wrongful explanation, my defence team contacted the Office of the High Representative in Bosnia and Herzegovina, which claimed not to have ordered the search. It appears that somebody did that at his own initiative. Those were Gestapo-like methods,” Karadzic said.

Judge Iain Bonomy interrupted Karadzic to say that his discussion had nothing to do with the trial or the tribunal. He advised Karadzic to contact the Central Office of NATO forces in Brussels, “because the Hague Tribunal does not have competencies for making any decisions” concerning this issue at this stage.

Karadzic also again accused the prosecution of “refusing to submit a transcript” of a discussion among General Wesley Clark, former RS President Biljana Plavsic and Special US Envoy for the Balkans Richard Holbrooke, who allegedly discussed Karadzic’s immunity from prosecution. Karadzic has insisted for years that Holbrooke cut him a deal in return for him leaving politics, something the former US envoy denies.

“I think that the Chamber underestimates the value of those transcripts, because they certainly do exist. They are very important because they can confirm what I am saying here,” Karadzic said.

The next status conference on the case will be held around February 19, by which date Karadzic is supposed to respond to the prosecution’s motion pertaining to the changes in the indictment.

The Hague Prosecution amended the indictment, originally issued in 1995, in September last year. The amended indictment charges Karadzic on two counts of genocide committed in 10 municipalities and over the Srebrenica massacre, and on the charge of joint criminal enterprise, which was not mentioned in the earlier versions of the indictment.

At the same time he is charged with other crimes committed in municipalities in the course of the war. The indictment provides a detailed description of the destruction of Sarajevo and certain detention centers in Bosnia and Herzegovina, as well as individual murders and the demolition of religious and cultural buildings.

A date for the start of the trial was not discussed at the session.