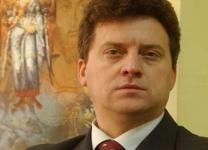 Ivanov, a political newcomer but a personal favorite of many senior VMRO officials, captured the overwhelming majority of delegates at the party’s convention on Sunday night to clinch the nomination.
He got the votes of 1016 delegates, while 91 votes went to runner-up Todor Petrov.

“United, we stand stronger” Ivanov told delegates. “Macedonia should be proud of its heritage, but it must be used in the service of the future.”

Opinion polls show support for the ruling party is currently double to that of the opposition, with analysts saying the VMRO DPMNE candidate has the biggest chance of becoming the next head of state.

The country’s main opposition party, the Social Democrats, have yet to put forward their own candidate. Their ouverture to the VMRO for a joint non-partisan candidate was rejected by the centre-right government.