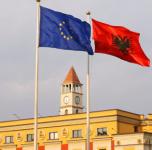 Albanian think-tanks that monitor the EU accession process disagree on whether the country’s application for EU candidate status should come during the Czech presidency or later.

Greece’s ratification of Albania’s Stabilization and Association Agreement, SAA, with the European Union last week was the final step in the formal approval process of the key document by all EU member states, paving the way for Tirana’s application for EU candidate status.

Prime Minister Sali Berisha has said that Albania would officially apply for EU candidate status in the coming months, possibly even during the Czech Republic’s six-month presidency of the EU.

According to a policy paper published on Monday by the European Movement in Albania, EMA, it is recommended that the application for membership in the EU should not become a goal per se, but should serve as an incentive for carrying out tangible reforms, which have an impact in the lives of citizens.

EMA argues that the submission of a membership application should be preceded by the adoption of a resolution, with political consensus, in connection with fulfilling the obligations that derive from this process. Parliament should also adopt a clear action plan in close cooperation with other actors of the Albanian society that determines the steps that Albania should undertake to fulfil its immediate tasks.

For Dimitir Bushai, EMA’s executive director, the Czech presidency is not the right time to submit the candidate status application because Albania has entered election season, a process which is sapping the administration’s energy.

“I don’t think that this is the right time to apply for EU candidate status,” said Bushati.

“Albania has to answer a lot of questions to the EU for such a status, and we are just ahead of parliamentary elections.”

After its intent to apply for candidate status is presented, Albania would have to reply to an EU questionnaire. For neighboring Macedonia, the questionnaire was 15,000 pages long.

“The application is being done for electoral reasons, so when election time comes, the government can say that we applied, however long the process of attaining such status will be,” Bushati added.

In the best-case scenario, like in Croatia’s case, the process to clinch candidate status would take one year. For Macedonia it took 21 months, while for Albania, Bushati believes it will take even longer.

Although it agrees that Albania’s overall goal at this stage should not be limited to the application per se, but rather to set clear deadlines as regards the post-application process and working towards meeting the requirements, a policy brief published in October by the Institute of Democracy and Mediation, IMD, points out that these process should start during the Czech presidency.

According to the brief authored by the IMD’s programs director Gjergji Vurmo and Stiven Blockmans, a senior researcher at the Asser Institute in Hague, the priorities of the Czech presidency are better focused on the EU’s relations with the Western Balkans.

For Vurmo and Blocmans, submitting the application in the first quarter of 2009 will not only enable the Czech Presidency to put the matter on the agenda of the Council, it will also enable the next-up Swedish Presidency to reinforce its priorities in relation to the EU’s eastern and south-eastern neighbours in its own agenda.

Both papers stress the importance of the 2009 electoral process when it comes to the attitudes that block will have towards Albania’s EU accession process.

The EU delegation head in Tirana, Helmut Lohan, said last week that the upcoming June 28 general election will be considered by Brussels as a litmus test for Albania’s bid to join the union.

“The parliamentary elections will be a test for Albania’s accession into the EU,” Lohan said during a conference hosting foreign investors on Wednesday.

In an address to the nation, Albania’s Prime Minister Sali Berisha promised solemnly that he would guarantee the fairness of the upcoming general election.

“I take an oath that the main objective [of the government] with be fair electoral process,” said Berisha.

“I guarantee this to the people of this country and call an all of you to participate.”

But critics say the Democratic Party government might be tempted to hold on power to avoid investigations for alleged corruption scandals.