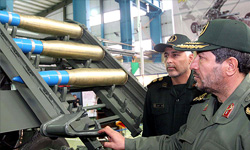 TEHRAN (FNA)- Iran succeeded in manufacturing a smart 100mm anti-aircraft gun as part of a campaign to boost the country’s defense capabilities.

“One of the most important features of this weapon is its smart system which can track down the target and fire at it automatically,” he added.

According to press tv, Mohammad-Najjar pointed out that the shells used in the system are equipped with a fuze which enables them to explode and terminate the target from a close distance even if they fail to hit it directly.

The 100mm anti-aircraft gun is an artillery system that can create a missile shield against enemy aircraft at medium and low altitudes.

Tehran began upgrading its defense capabilities after the eight year war that Iraq’s former dictator Saddam Hussein waged against Iran in the 80s.

Although Saddam’s military was heavily armed by the West- particularly the US- , he was unable to capture Iranian soil at the end of the war.

Western denial to sell Iran the weapons it needed to ward off a foreign aggressor prompted the government to establish a domestic military industry.

News of the production of an anti-aircraft artillery system comes as Israel, the Middle East’s sole nuclear, continues to threaten Iran over the country’s nuclear program.

In quite remarkable comments, the Israeli ambassador in Australia Yuval Rotem said that Tel Aviv’s recent military offensives in Gaza was a ‘prelude’ to dealing with the ‘threat posed by a nuclear Iran’.

This is while Iran’s nuclear program is under the constant supervision of UN nuclear watchdog inspectors, who have confirmed that the country’s atomic activities have not diverted toward weaponization.