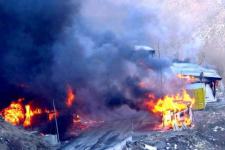 Serbs from north Kosovo blocked the roads at the border with Serbia on Thursday morning in protest at the European Union reopening two customs points that were burnt down just after Kosovo’s declaration of independence last February.

The two border points, known as 1 and 31, were set on fire two days after Kosovo formally seceded from Serbia on February 17, 2008. After almost a year of that part of the border being virtually unguarded, police from the European Union law and justice mission started registering goods going in and out earlier this week, but without charging any customs fees.

Serbs taking part in the protests complained the security situation had worsened since the arrival of the EULEX officer, and said they could not allow a customs administration operating on the border as long as an agreement with Belgrade had not been reached.

“People are ready to use all democratic means to fight against the despotism of the international powers and the Albanian extremists,” mayor of Serb populated Zubin Potok, Slavisa Ristic, told Beta agency at the Brnjak border crossing.
“This is just the first phase.”

At the Jarinje crossing, the mayor of Leposavic gave a speech appealing to Serb authorities to “support us in our fight.”
“This is the only way for us to preserve this territory as part of Serbia and stay in out homes,” Jovan Miladinovic told the crowd.

Tensions still run high between Kosovo’s Albanian majority and the Serb population of about 120,000, most of whom refuse to deal with Pristina as their capital.

Belgrade, which lost control of Kosovo after a 1999 bombing campaign expelled Serb forces accused of ethnic cleansing during a counter-insurgency war, has vowed to never recognise the territory as independent, and block its entrance into international bodies.