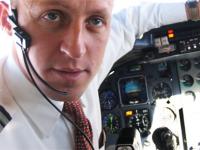 A Kosovo-born pilot will next month start a fly-in campaign across the Americas to persuade governments to recognise Kosovo, which this week celebrated one year since its declaration of independence from Serbia

Texas resident James Berisha, 37, will begin his Flying For Kosovo (www.flyingforkosovo.com ) campaign in March and has planned to fly his single engine plane to more than 30 countries in South and Central America, a region which has mostly ignored the Kosovo issue.

“I will thank those countries who have already recognized us, I will tell the others how important it is for Kosovo to be recognized worldwide, and I will try to end racial stereotypes that belittle our people”, Berisha told Balkan Insight.

Berisha spent his childhood in Kosovo, then left for Western Europe to fulfil his dream of becoming a pilot. He is now working for Sierra West Airlines, which operates executive jet charters and air cargo flights.

Since its declaration of independence, Kosovo has been recognized by 55 mostly Western states.