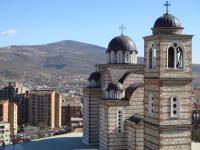 Serb inhabitants of the flashpoint town of Mitrovica have apparently reacted positively to partsof the “Ahtisaari Plan” that aim to create a multiethnic society in Kosovo, said David Slinn, Mitrovica representative of the International Civilian Office, ICO.

The ICO’ brief is to support implementation of all status settlements that initiated Kosovo Albanians’ secession from Serbia in 2008, which includes the plan of UN Special Envoy Martti Athisaari. Kosovo’s minority Serbs, especially in Mitrovica, reject the secession and ethnic tensions in that area run deep.

Slinn said the ICO had completed much work in the Mitrovica region in the past year, getting positive reactions from the Serb community. They “also received such reactions once Serbs were taken aback by the benefits the Ahtisaari plan has to offer, after much misinterpretation occurred in its direction”, he said.

“Nevertheless, we cannot reach much political progress if the issue of security is not preliminarily met with success, which KFOR [Kosovo NATO Forces] and EULEX [the EU mission to Kosovo] are accountable for”, he saidh.

The EU mission, EULEX, which was deployed on December 9 of last year, has been progressively replacing UN authorities in the country, however encountering problems in the north of Mitrovica. According to Slinn, the full implementation of EULEX in the north will take place by March or the beginning of April.