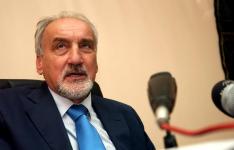 In an interview with Serbian daily Danas, Vukcevic said authorities were checking every bit of information that came in about Mladic, and had managed to reconstruct his movements. Bosnian Serb army commander Ratko Mladic, indicted on two counts of genocide for the 1992-95 war, and Croatian Serb wartime leader Goran Hadzic are still at large.

Vukcevic said Belgrade now showed the political will needed to arrest the two fugitives, adding that the report from Hague Chief Prosecutor Serge Brammertz was “objective,” .

The extradition of all war crimes indictees to the Hague court is one of the key conditions for Serbia to advance towards joining the European Union. The Netherlands, the country that hosts the tribunal, is blocking further steps by the Balkan state towards membership in the bloc unless all fugitives have been extradited.

He said that Serbia had “new evidence and astounding information” on the organ harvesting case, and was liaising with the Council of Europe on it. Serbia has said it has information showing that dozens of Serbs were kidnapped during the Kosovo conflict, taken to Albania and killed for their organs. Albania and Kosovo have denied any knowledge of the case.