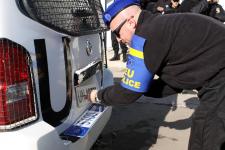 The EU’s law and justice mission in Kosovo, EULEX, prepared to launch the first trial under its mandate on Monday, against a protest by Serb judicial workers opposed to the work of the mission which they see as supporting Kosovo’s independence from Serbia.

The trial against two Kosovo Serbs accused of robbery in Leposavic will be led by three EULEX judges and a prosecutor.

The two men were indicted in June last year, charged with breaking into the home of an elderly couple in Gnjezane village, assaulting the couple and taking money and other valuables.

Serb judicial workers gathered in front of the court and blocked both entrances to the building, insisting on clarifications on the status and laws ruling EULEX’s mandate before any trials are held.

The courts in Mitrovica shut down last February, two days after Kosovo declared independence from Serbia in February. After negotiations with Belgrade, the United Nations mission UNMIK opened the Municipal and District Courts in Serb-populated northern Kosovo in October.