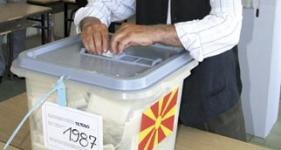 Georgi Ivanov, the presidential candidate of the ruling VMRO DPMNE party in the March 22 election, has a clear lead ahead of his Socialist Party rival, shows the latest opinion poll done by local think thank Centre for Research and Policy Making.

Over 30.5 percents of the respondents said they would vote for him on the March 22 election. Imer Selmani, the head of the newly formed ethnic Albanian party New Democracy takes the surprise second place on the poll with almost 18.8 percent of popular support, leaving the candidate of Macedonia’s main opposition party, the Social Democrats, Ljubomir Frckoski, third with 15.6.

Frckoski, previously seen as the sure-runner up in the race, now looks like he might not make it past the first round of voting.

Agron Buxhaku from VMRO’s ruling partner, the Democratic Union for Integration, DUI, Nano Ruzin from the opposition Liberal Democrats, the independent candidate Ljube Boskoski and Mirushe Hogxa from the ethnic Albanian opposition, the Democratic Party of Albanians have 10.9, 5.6, 4.4, and 2.7 percent respectively.

The March election is crucial for restoring country’s democratic credibility in the West after the 2008 June general election was marred by violence and fraud in the Albanian populated parts. The EU and NATO officials will closely monitor the process next month.

An unnamed European Commission official was quoted in local media as saying that “nothing is going to stop the EC from recommending an EU accession talks date for the country this fall if the elections go in a democratic atmosphere” adding that several unfinished reforms must be completed on time as well.

Since 2005, when it clinched EU candidate status, Macedonia has struggled to earn the date for the start of talks, as the EC held back citing insufficient reforms.