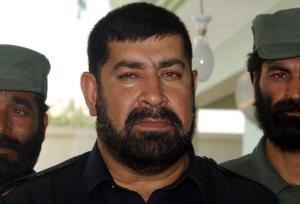 A former warlord tipped to unseat Hamid Karzai in Afghanistan’s coming elections has backed President Barack Obama’s plans to negotiate with the Taliban. Gul Agha Sherzai was the first Afghan leader Mr Obama met when he visited the country last year and, speaking exclusively to The Independent, he confirmed his plans to run for the presidency on a promise to empower the country’s tribes and negotiate with the insurgents.

“I will approach all the tribal elders to negotiate with the Taliban who have been brainwashed by other people,” the governor of Nangahar province said. “I won’t rely on fighting and destruction and air strikes. There are a lot of other ways to approach this other than fighting.”

The US President has opened the door to a reconciliation with moderate elements of the Taliban, noting the successes notched up in Iraq by extending a hand to Sunni militias. “Part of the success in Iraq involved reaching out to people we would consider to be Islamic fundamentalists, but who were willing to work with us,” Mr Obama told The New York Times. But he warned: “The situation in Afghanistan is more complex. You have a less-governed region, a history of fierce independence among tribes.”

The Afghan President, Hamid Karzai, claimed that Washington was simply echoing what Kabul has said for years. “This is approval of our previous stance and we accept and praise it,” he said.

But, in 2007, Mr Karzai soured relations with the West by expelling two of Kabul’s longest-serving diplomats for their involvement in such negotiations, And his Peace and Reconciliation Commission, designed to win over insurgents who renounce violence, is widely seen as a failure.

Mr Sherzai knows the insurgent enemy well. A former mujahedin, he ousted the Taliban from Kandahar with US Special Forces in 2001, shortly after the 9/11 attacks. But now the militants have regrouped, and when he met Mr Obama, then a presidential candidate, in July last year, they discussed options to bring peace to the border with Pakistan. “Afghanistan is a tribal society and we can solve all the problems through jirgas [traditional tribal councils],” he said. “I will tell all of the people, whoever is tired of fighting, to bring their Talibs to me and I will negotiate.”

Giving Afghanistan’s tribes responsibility for security is a central pillar of the review being conducted at Mr Obama’s request by General David Petraeus. In February, America launched a pilot programme, in Wardak province, to arm local communities so they can defend themselves against the Taliban. But, while making deals with tribal elders is central to Mr Sherzai’s plan, he thinks armed militias will store up future problems. “I don’t agree with militias. We don’t want people fighting in the future. We should support our army and police.”

With support for the President waning at home and abroad, analysts see him as one of only a handful of challengers with a credible chance of beating Mr Karzai in August’s polls. The man himself resembles a rotund, feudal king. At his office in the old King’s Palace in Jalalabad, he holds court at the head of an enormous banquet table, sat on a carved wooden throne. His neck flows over his collar and he is missing most of his top teeth. Lined up along the table’s long flanks are turbaned tribal elders, wrapped in traditional woollen cloaks, colonels with more medals than Afghanistan has had battles, and businessmen in western suits. They are a cross section of the local power brokers, a blend of old bloodlines and new money.

Mr Sherzai’s critics claim many of the problems afflicting southern Afghanistan stem from his stint as governor in Kandahar from 2001-03. Corruption and patronage in favour of his ethnic Pashtun people upset the tribal balance. But diplomats admit he has fared better in Nangahar, in the east, eliminating poppy cultivation and working with US forces and tribal elders to create an island of relative security and prosperity. Yet questions over his human rights record remain, he has been linked to the drugs trade and, as one western official said: “We’re not sure if his private life would stand up to much scrutiny.”

But Mr Sherzai is adamant about approaching the presidency differently. “In all of Afghanistan, with God’s help, I will go and sit with my tribes people,” he said. “I will divide Afghanistan into several zones and I will spend one month in each zone. I won’t spend my time in the presidential palace.”