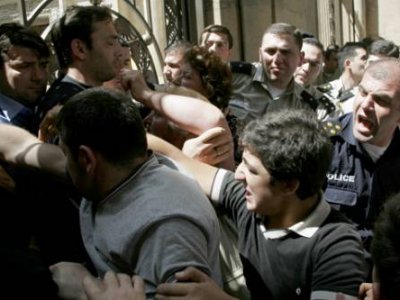 Protest organisers said three or four people were lightly injured when police moved in to push back demonstrators.

Dozens of anti-government protesters in Georgia briefly scuffled with police outside parliament in the capital Tbilisi on Monday and one person was detained.

“They wanted to block the road, so police stopped them,” Interior Ministry spokesman Shota Utiashvili said. He said one person had been detained and would probably be fined and released.

Several of Georgia’s main opposition parties are set to protest on April 9 to demand President Mikheil Saakashvili resign, in part over the country’s five-day war with Russia in August last year.

Criticism of Saakashvili has sharpened since the conflict, when Russia sent in tanks and troops to repel a Georgian assault on breakaway South Ossetia.

The pro-Western president was already under fire for a perceived authoritarian streak since coming to power on the back of the peaceful 2003 “Rose Revolution”.

In November 2007, police used teargas and water cannon to end days of opposition protests outside parliament in a crackdown criticised by Georgia’s Western backers as heavy-handed.