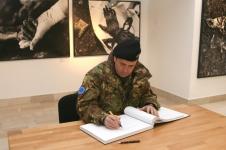 In response to the growing public concerns that some level of violence in Bosnia could be possible as a result of growing political tensions, as well as fast-approaching social and economic crisis, commander of the 2,000-strong EU-peacekeeping troops on Tuesday resolutely dismissed any such possibility.

“We are very much aware of the tensions on the political level. However, all reports that we have from the ground made us to conclude that situation throughout Bosnia and Herzegovina is calm and stable,” EUFOR commander, Italian Major General Stefano Castagnotto said in an exclusive written statement to the Balkan Insight.

“It is a fact that we have not registered any major incident in the last few years,” Castagnotto said. “Let me add also that, because of all that the country has gone through from 1992 – 1995, we believe that there is no appetite for a new war in Bosnia and Herzegovina.”

After three years of political deadlock, triggered by radicalization of positions of some local leaders, situation in the country escalated over the past month. Infuriated by apparently mishandled fraud probe, Bosnian Serb leadership threatened to withdraw from joint institutions or even secede from the rest of the country.

Many local and international officials fear that such move would trigger new violence in the country, although all agree that it would be nowhere near hostilities witnessed during Bosnia’s 1992-1995 war. Yet the very fact that possibility of new violence is being publicly debated once again, spread fears among many Bosnians.

Speaking at the Federal Television, FTV, on Monday evening, the deputy director of Bosnia’s State Investigation and Protection Agency, SIPA, Dragan Lukac said that media reports about the fraud probe were deliberately masterminded and initiated by Bosnian Serb “para-intelligence” elements.

These comments underscore the level of tensions and mistrust which spread from political sphere to the technical and managerial levels in key joint bodies in the country.

“We do have capacity and capability for this task. Troops in the country … if required – are trained, equipped and capable to answer security threats that may occur. And so are over the horizon forces and KFOR troops which are also on call for us if necessary,” Major General Stefano Castagnotto told Balkan Insight.

He stressed that in addition to 2,000 troops from 21 EU and 5 non-EU countries, which are currently stationed in Bosnia, EUFOR is also “backed by all their capitals both politically and military.”

“In short, no; we don’t see a new war coming,” he concluded resolutely.