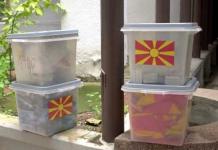 As political campaigning ahead of Macedonia’s March 22 presidential and municipal elections gains momentum, candidates focus on the ongoing name row with Greece and the state of the economy.

The candidates fielded by the ruling conservative VMRO DPMNE party and the main opposition Social Democrat party – seen as front runners – have opposing views on both of these issues.

The opposition presidential candidate Ljubomir Frckoski accuses VMRO and his counterpart of not putting in enough effort to solve the row with Greece, which would open the way for immediate NATO accession and help pave the country’s path towards the EU, thus automatically boosting the economy. Frckoski says he would wage a more pragmatic policy.

“This is the worst Macedonian political nomenclature since its independence,” Frckoski says, arguing that the government’s current policy will only lead the country to isolation, is bad for investment and bad for the economy.

His counterpart Geogi Ivanov says the economy is doing well and the country is staying firmly on its Euro-Atlantic course. During a recent TV debate between the candidates, Ivanov – who is seen as more of a hardliner on the name issue – argued that the country is not isolated.

“Macedonia is strong when it is open to all,” he said, pledging to continue to strengthen ties with both Macedonia’s neighbors and with the world.

Greece vetoed Macedonia’s entry into NATO last April, and insists that the name Macedonia implies Skopje’s territorial claims over its own northern province called by the same name. Skopje says it favours a compromise, but one that would not put in question the identity of the Macedonians.

Other candidates are Imer Selmani from the newly formed New Democracy party, the former police minister who was last year acquitted for war crimes in the Hague, Ljube Boskoski, running as an independent, the candidate of the opposition Liberal Democrats, Nano Ruzin, Mirushe Hoxha from the main Albanian opposition, the Democratic Party of Albanians DPA, as well as VMRO’s coalition partner, the Democratic Union for Integration’s, DUI, candidate Agron Buxhaku.

Opinion polls show that Imer Selmani is in roughly third place and may have a chance of becoming the first ever ethnic Albanian president that enters the second decisive round of voting – scheduled for April 5 – if he wins enough support from the majority Macedonian voters.

These candidates are all also urging a compromise with Greece on the name issue as soon as possible.

As for the local elections, the main contest is for the capital Skopje’s mayor. Eleven candidates have entered the race but here again the candidates fielded by the two principal parties are seen as having the biggest chance of winning.

These elections will be closely monitored by the EU and are seen as test for the country’s democratic credibility after last year’s June general poll was partly marred with violence and fraud. If they go well, the country will earn a tick in the box towards EU accession and could also hope for the lifting of the visa requirements for travel to the EU.