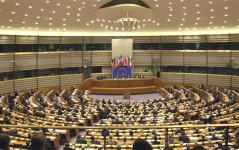 The European Parliament in Strasbourg, Thursday expressed its support for Macedonia’s EU candidacy and urged the EU to grant the country a date for the start of accession talks by the year end, local media report.

In the progress report for the country that was adopted, MPs expressed regrets that even three years after granting the country candidacy status in 2005, Macedonia’s accession talks have not yet begun, the local Makfax news agency said.

According to the report done by the European Parliament’s special reporter for Macedonia Erik Meijer this is an inadmissible situation, which has a demoralising effect on Macedonia and brings additional risks of destabilising the whole region.

In addition the European Parliament recommended a speedy lifting of the visa regime for Macedonians.

This is a serious diplomatic victory for Macedonia, Ivica Bocevski, the country’s deputy prime minister for EU integration said.”The European Parliament proved that it represents the democratic voice of Europe.”

The European Commission says it has not yet given Macedonia a start date for accession talks because the government has not undertaken sufficient reforms.

The MEPs adopted the resolution with 478 votes in favor, 92 against and 42 abstained.