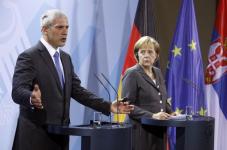 After meeting with Serbian President Boris Tadic on Monday in Berlin, Merkel said “Germany believes that Serbia has fulfilled the conditions for entry into force of the Interim Trade Agreement with the European Union.”

She added that there is a “logical order of steps” on every country’s path toward EU and pointed out that Serbia should submit its EU membership application only when the agreement goes into effect.

The trade pact is part of the Stabilisation and Association Agreement, SAA, signed last spring. It was immediately suspended due to the Netherlands’ strong opposition.

The Dutch are opposed to unblocking the deal before war crimes fugitives Ratko Mladic and Goran Hadzic are delivered to the International Criminal Tribunal for the former Yugoslavia, ICTY.

Merkel announced that Germany supported the SAA entering into force soon and that she would lead talks on this with EU partners and countries and that think Serbia hasn’t met the conditions for that to happen.

The Serbian President said that Serbia is doing everything to continue cooperating with The Hague and pursuing the arrest of the two war crime fugitives.

“I believe that the unfreezing of this agreement and submission of [EU] candidacy will be possible this year, after the upcoming report of the ICTY Chief Prosecutor Serge Brammertz,” broadcaster RTS quoted Tadic as saying.

Merkel and Tadic also discussed regional issues, mainly Bosnia and Herzegovina and Kosovo, which is the only point on which Serbia and Germany do not share the same opinion. Tadic reiterated that Serbia will never recognise the unilaterally declared independence of Kosovo.

Merkel also offered her condolences over the death of the Head of Serbia’s Orthodox Church, Patriarch Pavle.