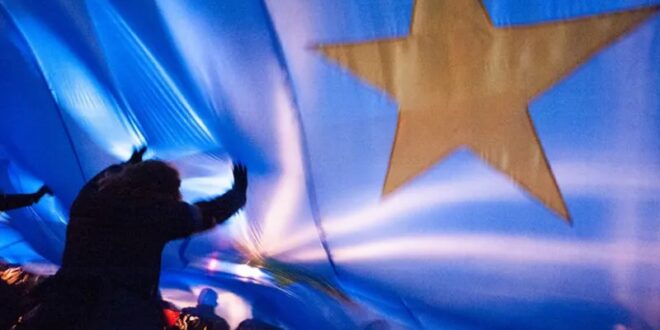 The Ukraine Crisis And Great Power Rivalry In The Balkans

Moscow still has the initiative in a crisis it provoked but apparent Russian failure so far to engineer a phony “internal” Ukrainian opposition leaves the situation literally on a knife’s edge. Russian propaganda is attempting to claim victory already by portraying post-Afghanistan America as “exhausted” but Moscow has struggled to provoke Western diplomatic disarray. For its part, the United States has lurched from a chaotic Trump Administration to the chaos of Biden’s withdrawal from Afghanistan and finds itself having to react to Vladimir Putin’s moves all around the former Soviet periphery. Still, Washington’s stern public warnings about Russian preparations seem to have surprised Moscow and out Putin on the back foot.

If reports from London are accurate Russia may have wanted to do in Ukraine what it failed to accomplish in Montenegro in 2016. Then, Russian interests and Serbian compradors botched an attempt to overthrow Milo Djukanovic. Some of those Serbs may have gone off script in a plot to kill Djukanovic outright. (Similarly, rogue pro-Russian Ukrainians may be responsible for the shootdown of Malaysia Airlines Flight 17 over Ukraine in early 2020). Djukanovic’s subsequent problems have come from his mishandling of the Serbian Orthodox Church not from any external threat – and he remains President of Montenegro no matter Moscow’s preferences.

The Russians may have tried to exploit public discontent with the stranglehold patronal oligarchs have over business, commerce, and politics in Ukraine to create a plausible fifth column in support of whatever military action they undertake. Meanwhile, Moscow decried Ukrainian non-implementation of the Minsk Agreement with Western audiences in mind. The fact of Western impatience with Kyiv’s failure to root out the country’s indelible elite could still serve to deepen divides in the West over how resolutely to oppose Russian aggression. Similar conditions informed Russia’s playbook in Montenegro.

Any shortcomings in Russia’s performance so far do not vindicate the lack of American strategic thinking regarding Ukraine or geopolitics in general. Rhetoric out of Washington continues to flow from the assumption that diplomacy and military action are alternative choices rather than tools in the same toolkit. Nevertheless, the US has managed to raise the bar regarding what would constitute a Russian military “success.” Its narrative has created a general expectation that Russian troops would overwhelm Ukrainian troops and conquer the country if they set out to do so. If that happens the US will have suffered a severe setback but will point to the fact of its forecast and attempt to rationalize away the impact of Russian victory. . Expectations that Russia would win any military confrontation builds on Moscow’s successful assaults against Georgia, Crimea, and eastern Ukraine and would color perceptions in case war is avoided.

On the other hand, if Ukrainian forces manage to slow or stall a large-scale Russian onslaught Moscow will face tough choices regarding how brutal it is willing to be. Western rhetoric also could spin a limited Russian intervention as proof Western resolve deterred something more awful. The West, of course, also would impose serious sanctions and denounce Russian aggression. In either case the Russians would have failed for now to engineer a decisive shift in European security.

The problem for both powers is that the longer the crisis drags on without resolution the less either will seem credible. Putin will have massed troops for what increasingly will seem to be an expensive and pointless piece of performance art. Meanwhile, breathless American warnings of war will wear thin on public ears. As each side’s messaging begins to suffer from diminishing returns neither will want to be the first to walk back off the ledge. Until Moscow and Washington agree on a way out there will remain a danger of impatience and miscalculation.

At this point the best non-violent outcome for Russia would be if in exchange for military de-escalation the West forces Kyiv to implement the pieces of the Minsk Agreements that undermine Ukrainian sovereignty much as the April 2013 EU-sponsored deal between Belgrade and Pristina undermines the sovereignty of Kosovo. Russia loses if the crisis results in a diplomatic process in which the West can credibly trumpet NATO cohesion in the context of no substantive Ukrainian concessions on the Minsk process.

Moscow is exploiting French President Emmanuel Macron’s ambition and political interests to produce a Russian diplomatic success. Macron faces reelection in April and could use something to brag about. Since becoming President he has tried without success to portray himself as the leader of EU and to present Europe as a first-tier player in geopolitics and security. Macron’s public claim that a diplomatic agreement on Ukraine is within reach, expression of sympathy with Russian security concerns, and declaration that the EU need not follow Washington’s lead to strike a deal may give Putin the opportunity to paint Ukraine as the obstacle to peace. With a pacifist Germany in tow, France might try to force on Kyiv another poisoned chalice which, like its predecessors in Minsk, undercut Ukrainian prepared the ground for the current crisis.

In reaction to the crisis Balkan states and media mavens are exhibiting appropriate caution. Belgrade seems content to stand back while France poses as a possible mediator. B92 asked which side Serbia is on but takes a line suggesting the government does not have to make that choice in advance of developments on the ground. It is unlikely either the Americans or Russians expect anything material from the Serbs, suggesting Belgrade’s effort to balance its relations with the great powers at little cost to itself is working pretty well. (Serbia enjoys a position similar to Prussia’s and unlike Austria’s in the diplomatic build-up to the Crimean War.)

Countries with weak or divided leadership initially did not display such steadiness. Croatia is a member of both the EU and NATO but is far from solidly aligned with the West. Croatian President Milanovic called Ukraine ”one of the most corrupt countries in the world,” sparking an apology to Ukraine and Western partners from Prime Minister Plenkovic. This suggests Russian efforts to increase its influence in Croatia has had at least limited success.

Romania and Bulgaria both reacted publicly to Russian demands that NATO withdraw its forces from their territories but while Bucharest blasted this affront to its sovereignty Sofia took a more measured approach. The Romanians have long been disappointed with NATO’s tepid reaction to their appeals for a stronger Alliance presence in and around the Black Sea and may use the current crisis to redouble efforts to once again push for a more robust NATO [presence in the region. Meanwhile, Bulgarian Defense Minister Stefan Radev expressed opposition to any new deployment of US troops to his country while other politicians had relatively little to say on the issue.

As the crisis has dragged on Balkan governments have all been relatively quiet and appear to be waiting to see what happens. . A major Russian military victory or diplomatic success regarding the Minsk process would cement Russian power in the Black Sea region, likely creating serious doubt in both Romania and Bulgaria as to the wisdom of their NATO membership. The fragile new coalition government in Sofia would face pressure from President Rumen Radev and other pro-Russian elements to reconsider its “European” orientation in security affairs. Romanian fears that the West is uninterested in and irrelevant to Black Sea security would be confirmed. On the other hand, any diplomatic outcome in Ukraine that leaves the impression that the status quo remains intact might persuade these Black Sea NATO members that Russia is a one dimensional military power and a manageable security threat.

Washington’s perceived success or failure to support Ukraine will indicate to pro-western voices in Kosovo and Bosnia whether they can retain (or regain?) a sense that the Americans can be counted on. Kosovo’s stunted status and the skillful decades-long manipulation of Washington and its diplomats by Milorad Dodik have disappointed those in both countries who have pinned their hopes on effective and decisive US action. The latest sanctions Washington slapped on Dodik and others have had as little impact as previous American exercises in personal punishment.

Meanwhile, Western pressure is building on Prime Minister Albin Kurti to knuckle under to their demand that he accept the creation of a Community of Serbian Municipalities in Kosovo. This would further undercut Pristina’s diplomatic and political status unless coupled with Serbian recognition of Kosovo’s sovereignty. Success in engineering a Russian climbdown on Ukraine would strengthen the impact of Western leverage on the skeptical Kurti. On the other hand, perceived Russian diplomatic and/or military gains would make the US and EU even more determined to force through a “win” in Kosovo to offset failures elsewhere. Pristina would lose either way assuming Belgrade pockets a success the EU promised it in 2013..

Afghanistan was perceived by everybody everywhere as a major US defeat and it is clear the US is struggling to manage threats emanating from China, North Korea, and Iran. However, these places are far away from the Balkans. Ukraine is close by and is the central theater of serial tests of wills between Russia and the West that sometimes also involve Balkan issues. Western success in blunting Putin’s attack against Ukrainian sovereignty would provide an exemplary message throughout southeastern Europe. On the other hand, a Russian diplomatic or military victory would greatly increase the likelihood that the post-1989 Western security system in Central and Eastern Europe will collapse in a way similar to the arrangement in the same region created by the Western powers after World War I.