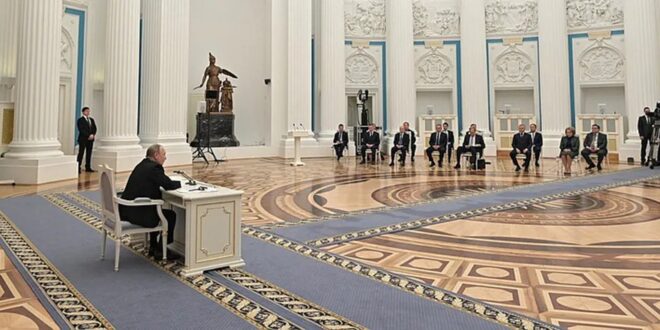 Russia Takes Another Bite at Ukraine

As Vladimir Putin moves his troops into eastern Ukraine, the signs are that worse is yet to come.

World governments have condemned the move of Russian President Vladimir Putin to recognise the ‘independence’ of two Moscow-backed self-proclaimed enclaves in Ukraine. Yet the challenge of responding adequately to Russia’s defiance of all of Europe’s security structures and post-Cold War arrangements has yet to be met.

There is no question that Putin’s move is rapidly foreclosing even the theoretical opportunities that existed up to now for a negotiated solution to the current crisis. The fact that Putin took such a controversial step days before a planned meeting in Geneva between Russian Foreign Minister Sergei Lavrov and his US counterpart Antony Blinken, and in the midst of speculation about a possible summit between the US and Russian presidents, is an indication that Moscow believes it stands to gain more by enforcing its will with boots on the ground, rather than by arguing its case in diplomatic conference halls.

Putin’s move to recognise the separatist republics also blows wide apart the effort to implement the so-called Minsk accords, a set of agreements worked out in 2014 and 2015 that called for a ceasefire and for a series of political steps that would eventually lead to limited political autonomy for the rebel territories within Ukraine.

It also renders redundant the ‘Normandy Process’, the diplomatic framework through which France and Germany were supposed to get Ukraine and Russia to talk to each other and forge a new relationship.

In an article published in the Russian quality daily Kommersant, Andrey Kortunov, the Director General of the Russian International Affairs Council and a RUSI dialogue partner, predicted Putin’s move on the enclaves a full day before it happened.

Kortunov wisely observed that, far from this being some fiendishly clever move by Russia, ‘the recognition scenario will mean that Kyiv has finally outplayed Moscow in a complex diplomatic game around the implementation of the Minsk agreements. It is the Russian side that will turn out to be the gravedigger of the Normandy process, although for seven years after the signing of the Minsk agreements, the main claims regarding their implementation were invariably addressed to the Ukrainian leadership. It is clear that after the recognition of the [rebel enclaves] by Moscow, there will be no need to talk about any further political pressure from the West on Kyiv’.

Just before announcing the recognition of the enclaves, Putin called both French President Emmanuel Macron and German Chancellor Olaf Scholz, in an obvious attempt to limit the diplomatic fallout. And soon afterwards, Foreign Ministry spokeswoman Maria Zakharova claimed that the move does not affect Russia’s readiness for dialogue. ‘Even in the most difficult moments… we said that we were ready for the negotiation process. Therefore, from our side, the position remains the same. We are ready for negotiation progress. We always advocate the use of diplomacy’, Zakharova said.

But no amount of sweet-talking from Putin’s trumpet-in-chief changes the fact that by recognising the rebels as allegedly independent entities, Putin has forfeited an entire diplomatic structure that kept Germany and France engaged and elevated these two European countries as Russia’s chief international interlocutors.

Putin’s move also personally humiliated French President Emmanuel Macron, who only a day before the Russian action led frantic efforts to find a peaceful solution to the showdown with Russia. Confronted by the new realities, Macron and his associates were blunt in their condemnation.

Putin, said a statement from the French presidency, is guilty of acting on the basis of ‘rigid and paranoid’ considerations. By recognising the independence of the Ukrainian separatist territories, the French statement continued, Putin ‘made a very clear choice to break his commitments’ and ‘did not respect the word given’ to Macron. One could not be clearer, or more ‘frank’ as a diplomat would have it.

And, by ordering his troops into the rebel enclaves, Putin has also given up any pretence that the conflict in Ukraine was just a domestic problem between the Ukrainian government and its Russian ethnic minority, with Russia itself acting merely as an ‘honest broker.’ That claim was never very persuasive. But from now on, Russia is explicitly and officially a party to the conflict in Ukraine, so Moscow can no longer escape responsibility for developments, or from accusations that it is simply engaged in a land grab.

The criticism levelled at Russia by Kenya during Monday’s emergency UN Security Council debate that ‘multilateralism lies on its deathbed tonight’ was telling; Russia used to enjoy quite a backing from postcolonial nations. And equally telling was the fact that China avoided endorsing the Russian action, while China’s state-owned media reported extensively the voices of opprobrium against Putin’s actions.

However, it is the justifications Putin offered during the bizarre National Security Council public meeting he held in the Kremlin on Monday and the subsequent announcement of the recognition of the rebel enclaves in a long and rambling televised speech to his country that should cause outsiders the biggest worry. For they revealed a Russian leader obsessed with his own vision of Russian history and convinced that he is on a mission to make good on past wrongs and to restore Russia to its past glories.

This is not someone prepared to be swayed by any arguments; the public humiliation he appeared to be inflicting on people like Sergei Naryshkin, his foreign intelligence chief, who seemed hesitant on the question of the statelets’ recognition during the National Security Council meeting, was telling. Judging by his actions, the Russian leader appears to be living in a world of his own creation, one in which facts no longer matter.

Much of what Vladimir Vladimirovich may have in store for us in the near future remains, of course, a matter of conjecture.

We still do not know, for instance, whether the recognition applies only to the statelets the rebels currently control, or whether it may apply to the entire administrative units of Ukraine to which the rebels lay claim. Russian Deputy Foreign Minister Andrey Rudenko has said that Putin’s recognition applies only to the boundaries over which the rebels ‘exercise their powers of authority’. But Leonid Kalashnikov, the head of the State Duma (lower house of the Russian parliament) committee on the affairs of the former Soviet states suggested earlier that the two statelets should be recognised within the borders they had at the time of the ‘independence referendums’ the two rebel-held territories of Ukraine conducted in 2014, a much more expansive territorial concept.

There is a chance that, while Russia may be satisfied with the borders of the enclaves at the moment, Moscow could soon start making a claim beyond them, in a strategy of so-called ‘borderisation’ akin to what Moscow has long pursued in Georgia – although the stakes in Ukraine are of course much higher.

And beyond this? It is possible that the recognition was designed to goad Ukraine into responding, and thereby provide Putin with the justification for a broader military invasion of the country. That has obviously not succeeded; Ukrainian President Volodymyr Zelensky has not risen to the bait that Georgia’s then-president Mikheil Saakashvili swallowed all too eagerly – and with tragic consequences – back in 2008. Still, these are early days and Putin has many more tricks of this sort up his sleeve, including the outright annexation of the statelets after an obligatory ‘referendum’ Crimea-style, in which the results are known before the voting takes place. This, too, could be calculated to humiliate Zelensky’s government by illustrating its impotence, in the hope that the Ukrainians will provide the justification for a full invasion.

What seems fairly clear at this stage is that Putin would not concentrate almost 200,000 troops at Ukraine’s borders only in order to send a few reinforcements into two enclaves Russia already controlled, and where the Russian military was already present.

The conclusion is, therefore, inescapable: the recognition of the statelets is merely a stepping-stone to the wider objective of subduing Ukraine and dividing Europe into spheres of influence. That much was clear from Putin’s conduct throughout Monday; in every statement and speech he made, the comments about the supposed maltreatment of people in the Donbas were just a prelude to a much broader litany of complaints about Ukraine’s current government and the West in general.

Much more violence and bloodshed lie ahead of us.

Post Views: 183
Previous Ukraine and Intelligence Prebuttal: A Quick Post-Mortem
Next The Plot to Destroy Ukraine