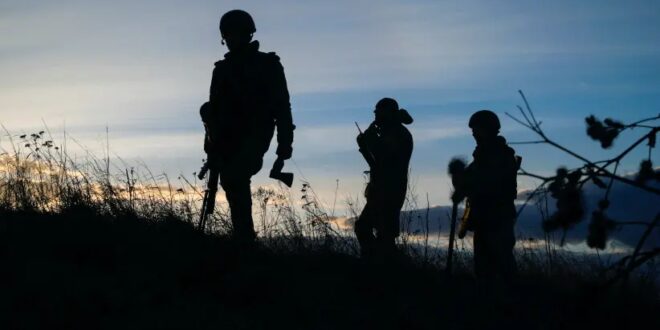 Zelensky calls on foreigners to join in war against Russia

Ukraine has called on foreigners to come pick up arms and fight against Russian troops as they continue to assault the country.

President Volodymyr Zelensky announced the formation of a new unit on Sunday morning, the International Legion of Territorial Defense of Ukraine, made up of foreigners who want to take part in the war.

“Foreigners willing to defend Ukraine and world order as part of the International Legion of Territorial Defense of Ukraine, I invite you to contact foreign diplomatic missions of Ukraine in your respective countries,” tweeted Ukraine’s Foreign Minister Dmytro Kuleba. “Together we defeated Hitler, and we will defeat Putin, too.”

Following the request, British Foreign Secretary Liz Truss said that she supports Brits going to Ukraine to fight against the Russians.

“I do support that,” Truss said, speaking to the BBC. “Of course that is something that people can make their own decisions about. The people of Ukraine are fighting for freedom and democracy – not just for Ukraine, but for the whole of Europe, because that is what President Putin is challenging.”

The call for foreigners to join Ukraine’s military in repelling the continued invasion comes shortly after Ukraine’s embassy in Tel Aviv called on Israelis to join.

“Urgent!” said the embassy’s Facebook post on Saturday. “To the attention of persons who wish to participate in the protection of Ukraine from Russian military aggression! Dear compatriots, brothers and all caring citizens of Israel and other countries who are currently in Israel! The embassy has begun the formation of lists of volunteers who wish to participate in combat actions against the Russian aggressor.”

The message said that “if you are ready to defend the sovereignty of Ukraine, please send… your CV to the email address [email protected],” adding that those interested in joining should provide personal information including their “military specialty.”

Though the Israeli Foreign Ministry and IDF Spokesperson’s Unit declined to comment on the Ukrainian call for volunteers, The Jerusalem Post understands that despite being online for only a short period of time, many people called to volunteer.

There are hundreds of thousands of citizens of Ukrainian descent in Israel, many of whom have served in the IDF. Israeli media interviewed several Israelis with Ukrainian citizenship who are currently in Ukraine and have already volunteered for combat.

According to a report in Haaretz, Ukraine’s Ambassador to Israel, Yevgen Korniychuk, said that he was “particularly” interested in combat medics.

Israel has said that it would provide humanitarian aid, including medical aid, to Ukraine. Though the IDF is not expected to deploy to Ukraine to provide medical care to soldiers, the IDF’s medical corps is known to be a leader in field medicine and disaster relief.

Its field hospitals have been recognized by the World Health Organization as a qualified foreign medical team, making it able to deploy to other countries and aid in medical disaster relief. IDF troops can provide operating rooms, surgical teams, ICUs and inpatient referral surgical care.The IDF’s medical corps, one of the largest health organizations in Israel, faces unique challenges, providing it with battlefield knowledge not available elsewhere.

Following Russia’s invasion last week, Ukraine has been recruiting citizens of any age to its Armed Forces, and has provided weapons to civilians as well as information on how to build Molotov cocktails to throw at Russian military vehicles.