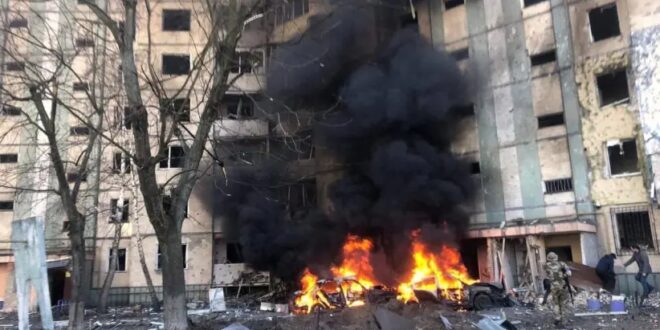 Air raids sounded at the same time across Ukraine in 20 different cities on Monday afternoon.

A Russian shipped shelled Ukrainian houses in Odessa on Monday morning, according to the spokesman for the Odesa Regional Military Administration. No casualties were reported.

A Russian landing ship entered the Ukrainian port of Berdyansk on Monday, delivering ammunition and equipment to Russian forces in occupied Ukrainian territory, Interfax reported. According to Zvezda another ten vessels were delivering equipment following the initial landing.

Berdyansk is a Ukrainian city in on the coast of the Sea of Azov, west of the encircled city of Mariupol. The Orsk, an “Alligator” class landing ship, is capable of carrying significant amounts of vehicles and supplies.

Russian forces have reportedly been suffering from logistical issues, but support from naval forces may allow them to reconnect severed supply lines.

According to a report by Pravda, the Russians mined the Black Sea and claimed that it was the Ukrainians who had done so.

Ukraine’s armed forces reported on Monday that the Russians holding Zaporizhzhya are secretly organizing elections in the region.

Deputy Prime Minister Iryna Vereshchuk said on Monday that Ukraine had “of course” rejected a Russian ultimatum for people in Mariupol to surrender and the situation in the besieged city was “very difficult.”

“There can be no talk of any surrenders and laying down of arms. We have already informed the Russian side about this,” Vereshchuk said to Ukrayinska Pravda.

Russia offered to open humanitarian corridors from the city from 10 a.m. Moscow time (0700 GMT) if residents lay down arms.

“Of course, we rejected these proposals,” she said. “The situation there is very difficult.”

On Monday evening, the Russians constantly fired on Mariupol from warplanes, systematically destroying buildings and infrastructure, the Azov regiment reported.

Fighting continued north of the capital as the war entered its 26th day, but according to the UK Defense Ministry, “Russian forces advancing on the city from the north-east have stalled.”

“Forces advancing from the direction of Hostomel to the northwest have been repulsed by fierce Ukrainian resistance,” the ministry said in a Monday intelligence update. “The bulk of Russian forces remain more than 25 kilometers from the center of the city. Despite the continued lack of progress, Kyiv remains Russia’s primary military objective and they are likely to prioritize attempting to encircle the city over the coming weeks.”

Russia has used drones to coordinate airstrikes and artillery on Ukrainian targets, said the Ukrainian military.

“According to the information we have at the moment, several homes and one of the shopping centers [were hit],” Mayor Vitali Klitschko said on his Telegram channel.

He said that rescue teams were putting out a large fire at the shopping center, while other details were still to be confirmed. The Kyiv Department of the State Emergency Service said four people had been killed.

Some 2,389 Ukrainian children from Donetsk and Luhansk were deported to Russia, according to a report by the Ukrainian Ministry of Foreign Affairs. Such an act would constitute as a violation of humanitarian international law.

The UN migration agency said on Monday that nearly 6.5 million people had been displaced in Ukraine as a direct result of the war, citing a study it conducted between March 9-16.

“The scale of human suffering and forced displacement due to the war far exceeds any worst-case scenario planning,” said António Vitorino, Director General of the International Organization for Migration. He said IOM teams had been providing aid to thousands of people but those in severely affected areas remained out of reach.

Russia is prepared to swap them for Russians captured by Ukraine, Tatyana Moskalkova was quoted as saying.

Ukraine claims to have killed almost 15,000 Russian soldiers since the war began, though US intelligence estimates put Russian casualties at about half that. On Monday morning, the Ukrainian military claimed to have destroyed 498 tanks, 1,535 armored vehicles, 240 artillery pieces, 80 MLRS, 45 anti-aircraft systems, 97 warplanes, 121 helicopters, 969 other ground vehicles, three ships, 60 fuel tankers, and 24 UAVs.