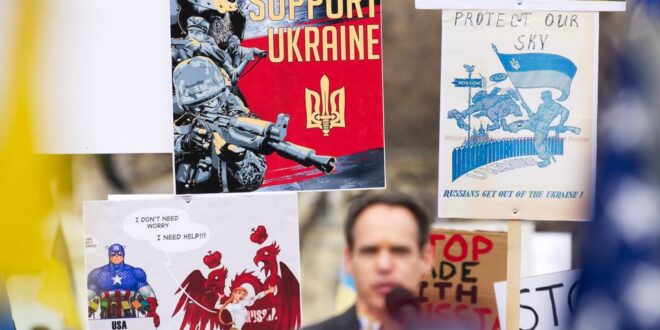 A potentially $300 million batch of aid eventually bound for Ukraine will include communications systems and similar gear, according to the Department of Defense.

“There’s a quite extensive, detailed list of what some of these capabilities are, including unmanned aerial systems and some tactical secure communications and other like capabilities,” Pentagon Press Secretary John Kirby said at an April 4 briefing.

Kirby did not offer further specifics about the equipment.

Communications and connectivity have been besieged in Ukraine, as Russia continues to assail the Eastern European nation. The telecommunications industry, specifically, has become a primary target for hackers, according to its government.

“The enemy’s attacks against the telecom industry occur on a daily basis,” Yurii Shchyhol, the head of the State Service of Special Communication and Information Protection of Ukraine, said in an interview publicized this week.

Since the start of the war, Ukrainian officials have observed and logged a flood of cyberattacks on its systems. Most, however, have proven unsuccessful and “do not affect the work of critical information infrastructure,” the state service said in a statement.

Kirby on March 22 told reporters the “Ukrainians still have good command and control over their forces in the field” despite Russian efforts to harass and disrupt.

“This, of course, underscores our unwavering commitment to Ukraine’s sovereignty and their territorial integrity in support of their efforts to repel the Russian forces inside their country,” Kirby said April 4.

Instead of siphoning the equipment and supplies directly from U.S. stockpiles, the Defense Department will work with the private sector to fulfill orders.

“Unlike presidential drawdown, USAI is an authority under which the United States procures capabilities from industry rather than delivering equipment that is drawn down from our own stocks,” Kirby said. “That’s the difference here. So, this announcement represents the beginning of a contracting process that will provide these new capabilities.”

Neither procurement nor delivery dates were immediately available. But, Kirby emphasized, “we’re going to be moving as fast as we can.”

The U.S. has provided more than $2 billion in security assistance to Ukraine since the onset of the Biden administration.