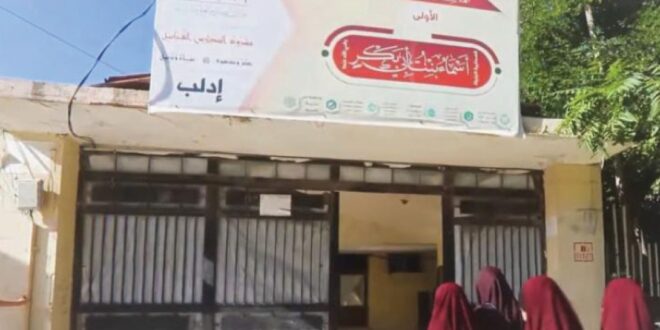 Jabhat al-Nusra is trying to raise a fully ideological generation through its school programs, according to al-Watan.

Widespread controversy has been sparked by images of a lesson plan, adopted by the so-called Tahrir al-Sham’s (HTS) Dar al-Waheed al-Sharif schools, where the terrorist group Jabhat al-Nusra is influential. Accusations have mounted that Jabhat al-Nusra is imposing “jihadist” curricula among children in areas under its control in Idleb.

According to media sources supporting the opposition and terrorist organizations in Syria, the images showed a lesson drawn from an English book, suitable for the sixth grade, entitled “Muslim Heroes.” The lesson covered the Saudi terrorist named Samer al-Suwailem, which is known as the Chechen Discourse.

These “schools” incorporate gender segregation, and in each city or town there are male and female student schools, as separated from teachers, prohibiting a male teacher from teaching in female schools or a female teacher in male schools.

A local journalist in Jabhat al-Nusra’s areas of control explained that the Dar al-Waheed al-Sharif schools, run by Jabhat al-Nusra’s so-called Syrian Salvation Government, rely on special curricula supervised by a number of al-Qaeda’s “legitimate” people. This influence allows the institutions to offer curricula that bring together scientific and legal perspectives.

The source indicated that schools focus more on Islamic science, as the Nusra organization aims to raise a fully ideological generation

Further, the source noted that the former leader of the Ahrar al-Sham Islamic Movement militia, Abu Jaber al-Sheikh, is one of the most prominent administrators of al-Dar schools. The schools are distributed throughout most cities and towns in rural Idleb, which is mostly under Jabhat al-Nusra’s control. At present, there are 42 schools and 13,500 students.

While al-Nusra is accused of trying to instill global jihadist ideology in a new generation, some who embrace terrorist ideologies praised the discussion of the Chechen discourse. One of them tweeted: “If it were not for the grace of liberation — no matter how wrong it may be for the mujahedeen and revolutionaries — we would not have seen such a lesson in the sixth-grade English book in Dar al-Waheed al-Sharif schools in the Syrian city of Idleb.”

Post Views: 181
Previous “Syria Is a Hot Conflict, Not a Frozen One,” Pedersen
Next Badia: ISIS Retaliates After Leader Killed