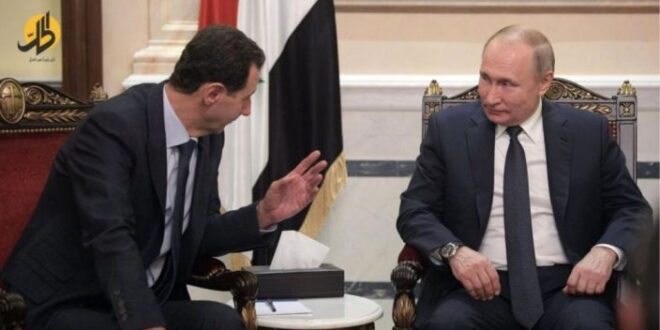 As the Russian invasion of Ukraine enters its third month, the war’s direct effects have seemingly started to cast a shadow over military and political balances in Syria. This is especially true since the Russia that began the war is no longer the same Russia — particularly given the military, economic, and political attrition.

In a report, the German Institute for Security and International Studies said that Syria immediately felt the effects of the war in Ukraine, exacerbating the already dire humanitarian situation in the middle-income country. This came at a time when Russian support for the country’s economy had declined, particularly with regard to oil derivatives.

“The direct effects of the war in Ukraine on geopolitical interactions in Syria appear to have been limited so far,” said the report, which was published in the Asharq al-Awsat newspaper. “The main external forces, which have a military presence on the ground in Syria, have broken their cooperation due to tensions over Ukraine. The military disengagement agreements between Russia and the United States, as well as Russia and Israel, are ongoing.”

According to the Institute’s report, the Russian invasions of Ukraine “directly affected Russia’s capabilities to intervene in Syria. Moreover, we can already see a shift in Russian foreign policy priorities. The impact on Russia’s specific interests in the Syrian conflict will depend on the duration and course of the conflict in Ukraine, and beyond.”

“The war in Ukraine may have a greater impact on Russia’s deployment of irregular armed forces. In order to fill gaps on the Ukrainian front, Russia may find it useful to send private military companies and “volunteers” from Syria to Ukraine. This could undermine the strike force of the Syrian armed forces.”

Writer on Russia, Taha Abdul Wahed, said that the Russian invasion of Ukraine has weakened Moscow’s economic and military capabilities. He believes, however, that it will not lead Moscow to reduce interest in maintaining a military presence in Syria.

“I believe that Russia’s interest in Syria, in the context of the confrontation in Ukraine, will increase further. And Syria will become more important to Russia than it was before the invasions began,” Abdul Wahed told al-Hal Net.

A major confrontation between Russia and the West

According to Abdul Wahed, Ukraine has become a “battleground” between Russia and the West. Accordingly, Syria could become particularly important in the context of a transition — albeit an indirect one — from political to military confrontation.

On why Moscow is increasing interest in remaining on Syrian territory, Abdul Wahed added: “Syria is the base that can play a role in NATO’s southern region across the Mediterranean. So I do not think that anything will change for the Russian stance in Syria, except that Moscow will become more determined to stay in Syria.”

“If you go towards a political settlement, I think that Moscow will show greater adherence to the Syrian regime. This is because the regime is the only guarantor of Russia’s ongoing presence on Syrian territory, which means a greater complexity of the political process in Syria,” Abdul Wahed said.